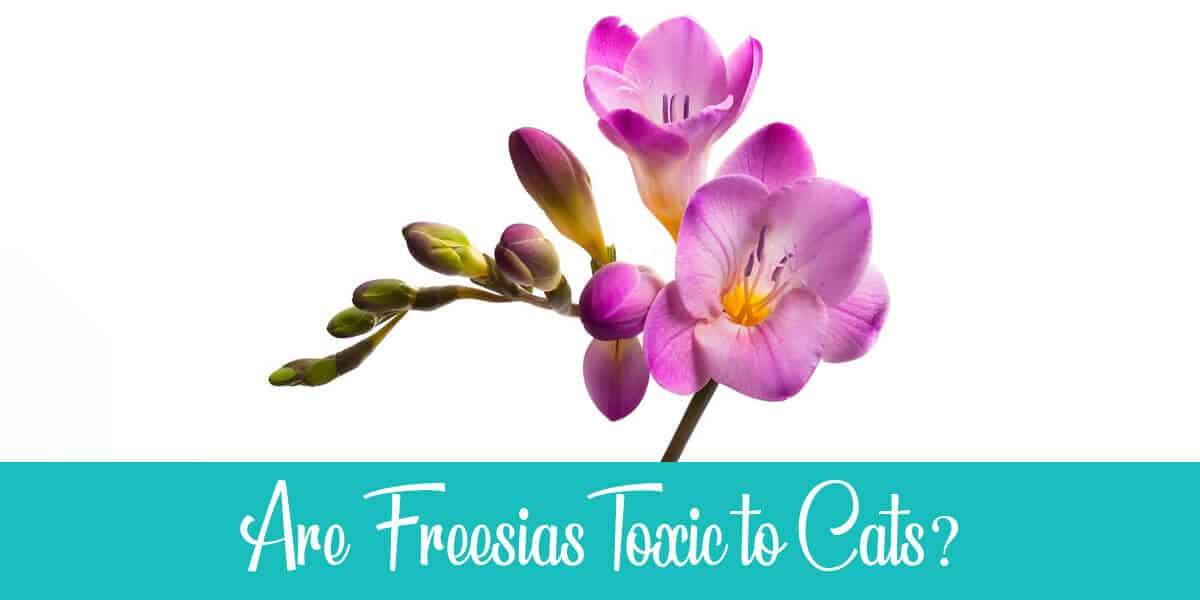 A bouquet or a vase of flowers is a pleasure to have around the house, especially Freesias, one of the oldest and most used flowers on any classy occasion.

Having a cat or more around the house is great fun as well, but what about their safety?

Many people often overlook very simple things that may endanger their pets’ health. No shame though! It’s easy to forget sometimes what may be toxic to our pets beyond just what they eat.

So, are Freesias poisonous to cats? What other plants can be toxic to my kitty? Let’s find out all about that and more on how to keep your furry friend safe with house plants.

Are Freesias Poisonous to Cats?

No, not for the most part anyway. But, much like us humans, every cat is different, and the digestion of large quantities of any plant can cause problems. Keep an eye on your pet. If they do ingest any part of the plant, and any symptoms arise (vomiting, intense diarrhea, drooling..etc.), get in touch with a vet right away.

If you’re not familiar with them, Freesias are scientifically known as ‘Freesia corymbosa.’

They are flowers from a family of plants called Iridaceae. It was first recorded as such in 1866 by Danish botanist Christian Fredrich Ecklon, and they were named later on by Ecklon after another botanist from Germany called Fredrich Freese in honor of their great friendship.

Freesias are native to central and south Africa, specifically in a region called ‘The Cape Provinces.’ They spread later on across the world during the end of the 19th century and were an icon of affection during the Victorian era.

What If My Cat Eats Too Many Freesias?

As we’ve mentioned before, Freesias aren’t inherently poisonous. However, ingestion of large quantities may cause problems. So, what are the symptoms to look for if you suddenly had a look at your Freesia vase only to discover your cat has had an early dinner?

There are several common symptoms when a cat is poisoned due to plant ingestion, these are:

Monitor your cat in case it eats a considerable amount of the plant, and be on the lookout for any changes in its normal behavior. In most cases, your cat will be fine, however, should your cat exhibit any of the previous symptoms, contact a vet immediately.

My Cat Is Poisoned, What Do I Do?

Many people fall into the trap of encouraging your cat or pet to vomit when they ingest something they shouldn’t, especially if it’s something poisonous. This is especially wrong since some poisons can become even more dangerous after vomiting.

Should you notice or suspect your cat is poisoned, start by removing the plant or poison source for that matter.

Remain calm. There should be nothing to worry about as long as you contact your vet once you notice any serious symptoms. In some cases, the situation can even be diffused through some simple instructions over the phone with your vet.

Preventing Your Cat From Being Poisoned

If you’re an avid gardener or someone who generally likes to have plants and flowers around the house; here are two good practices to consider to keep your feline friend safe.

Aside from poisonous flowers or plants off the bat, there are some things you should keep an eye for with Indoor plants that may upset your pet.

Related:
– Are Gerberas Dangerous to Cats?
– Are Fuchsias Harmful to Cats?

Watch out for common plant mold and fungi

If you’re growing plants at home, you should already be familiar with common plant mold and fungi. Although the types of fungi that may appear are usually related to the plant you have, it’s generally a good practice to get rid of them or keep them out of reach of your pet.

Some common plant and house Fungi can cause allergic reactions, irritations, and diseases to your pet if they come in contact with moldy plants or fungi spores.

Some plants, including Freesias, require you to keep foliage around for some time to cultivate the plant and let the roots regain energy during growth. However, some common house plants’ foliage is known to be poisonous to cats, such as the Fern and the Mistletoe.

Cut foliage when possible. If not, we advise you to keep it out of your cat’s reach, in the case that it’s necessary for the growth process of whatever you’re growing.

Other Poisonous and Safe Plants to Cats

Now that we’ve established that Freesias are safe for the most part, here are some plants that you need to watch out for when you have cats around at home.

Some of these plants are commonly sold and grown at home, just because of how low maintenance and attractive they are, however, most of these plants and their associated families cause many of the symptoms we’ve mentioned before, or additional problems if your cat comes in contact with them:

That’s quite a bit of nice plants crossed off, but no worries. There are other equally beautiful plants you can have around that are perfectly safe to cats:

At the end of the day, are Freesias are not poisonous to cats? No, but they can cause mild stomach upset, should your cat eat a lot of them at once. In any case; always keep an eye on your pet, and when or if you come across any unusual symptoms, contact your vet right away. Should you consider growing a certain house plant at home, always check if they’re safe for your cat, and steer away from the ones we’ve mentioned.

With all that being said, you can safely enjoy having Freesias around, whether it’s a vase at home or a bouquet you want to give to someone with a cat.