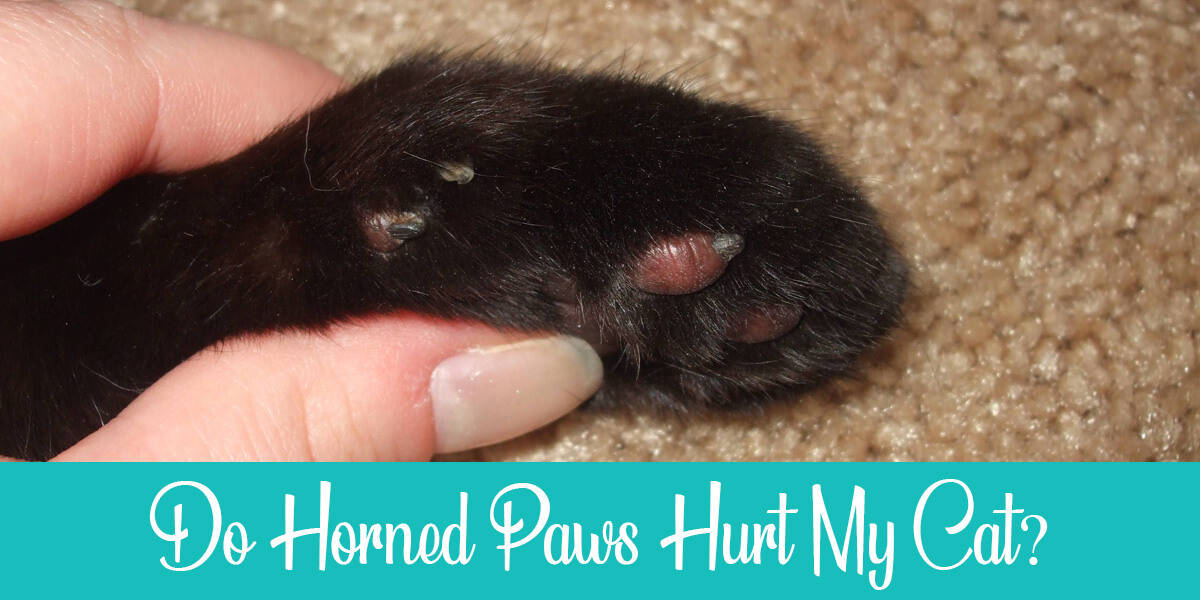 Worried about that extra claw that has just appeared on your cat’s footpad? Do you ever wonder, “do horned paws hurt cats?” No need to panic; they’re quite common.

Horned paws are usually mild skin abnormalities that take the shape of a horn on different areas of a cat’s body. There are many treatments to soften the paw and its effect or even remove it altogether if you have to.

These new claws shouldn’t scare you; they’re a result of mild skin disorders that don’t typically cause pain or discomfort except in some rare cases. However, you should still watch out for anything unusual that might be a sign of something more serious.

Although they can be signs of serious illnesses in some occasional cases, horned paws are usually harmless skin disorders that don’t cause any pain to your cat. However, if they appear on certain spots on the footpads, they may affect your feline friend’s mobility.

But don’t worry;  there’s a wide variety of treatments that range from simple home remedies to surgery.

Also known as a cutaneous horn or hyperkeratosis, a horned paw’s an abnormal thickening of the skin on a cat’s footpad that looks like a horn. It normally appears too close to the actual nails that it may easily be mistaken for one of them.

Although it’s mostly spotted on the footpad, there are some infrequent occurrences when a horned paw would show on a cat’s face or other body parts.

What Causes a Horned Paw?

There’s no clear-cut answer to this question, and we can’t pin down a single reason for the appearance of horned paws, rather a number of possible causes.

As its name implies, hyperkeratosis is a condition generally triggered by the excess of keratin, the hormone responsible for the growth of hair and nails in different species, including cats.

Another cause for this condition may be the presence of cysts slowly leaking fluids that harden over time and cause the formation of such horn-like hardened skin. A third can be excessive friction which may result in calluses that develop into these abnormal skin formations.

Though horned paws are nothing to worry about for the most part, sometimes they raise serious red flags. A horned paw may be a sign of Papillomavirus infection, Squamous Cell Carcinoma, FeLV, or other illnesses.

Don’t apply any treatment before consulting with your vet to avoid harming your kitty.

Related: Why Are There Black Beads Around My Cat’s Bum?

This question must have crossed the mind of every cat lover. The good news is that horned paws are typically harmless. Their most common side effect is the clicking noise your cat makes as it walks around and its new super powerful scratch.

In fact, most cats don’t show any signs of being affected by it while climbing trees or carrying out any of their daily activities.

However, on some occasions, the horned paw develops on a weight-bearing spot on a cat’s footpad, which makes your feline buddy limp or affects its ability to move altogether.

It’s always a good idea to schedule an appointment with your vet as soon as you spot any type of abnormality. Though if your cat shows no sign of pain or discomfort despite the appearance of horned paws, there might be no need for that appointment.

How to Treat Horned Paws?

Even though there is no simple known cure for this condition, there are a number of treatments that have proven effective in some cases.

You may wash the horned paw with soap and water. This would actually help you spot any strange object, abnormal occurrence, or infection within or around this extra claw.

Some people attempt to trim down that extra claw just as they’d do to a normal claw, but it’s highly inadvisable. Trimming a horned paw might trigger excessive bleeding, cut healthy tissue, tamper with tumors, or accidentally spread infections.

It might be a good idea to soften the hard tissue of the horned paw using balms, emollients, or moisturizers. Softening the tissues may ease any discomfort and facilitate trimming. However, it isn’t enough to get rid of the extra paw or even limit its growth.

Removing this claw by laser can, in many cases, be a better alternative to traditional surgery since it avoids the risks associated with bleeding, sedation, and pain.

In some severe cases, you may resort to surgery if the horned paw is growing unusually fast, is a sign of a serious skin condition, or affects the cat’s ability to get around. The procedure is considered minor surgery and is done under minimal sedation.

Can a Horned Paw Heal On Its Own?

Well, not really. Although it might be tempting to think that a horned paw would grow long enough to get cut off on its own, it’s not going to happen. Interestingly, regular friction may eventually cause the horn to wear off all by itself, but you still shouldn’t count on that.

Although feral cats are more likely to develop horned paws due to their exposure to excessive friction, their active lifestyles may also be the reason for losing the horned paws naturally. It’s harder for domestic cats to lose that extra claw as they generally exert less pressure on their paws due to their relatively lazy lifestyles.

What causes the overproduction of keratin in cats?

There are multiple possible reasons behind the overproduction of Keratin in your feline friend. Some of them include allergies, lack of healthy grooming habits, immunosuppression, and viral infection.

What is pillow foot in cats?

Pillow foot is an uncommon disease that strikes the footpads of a cat. The main symptom of this disease is inflamed footpads due to the accumulation of plasma cells, which are a type of white blood cells.

Do older cats get skin tags?

Yes, this is possible and you shouldn’t be worried in most cases. Usually, skin tags appear due to one of those reasons: your cat is getting older, normal skin friction, or some genetic reasons. It might also be due to an imbalance of hormones or if your cat is diabetic but this is quite rare.

If you’re still asking, “do horned paws hurt cats?” I’m telling you there’s absolutely no reason to panic if you find that extra hard, horn-shaped claw on the footpad of your beloved cat. It’s probably nothing but a simple skin abnormality that may be caused by calluses, oozing cysts, or keratin overproduction.

However, it may be a sign of severe health issues such as various types of feline tumors or infections in some cases.

Though horned paws don’t normally hurt cats or affect their lifestyles and activities, in some cases, they may impair their mobility or cause little or severe discomfort. That’s why there are plenty of potential treatments out there, such as washing, softening, trimming, laser declawing, and surgery.