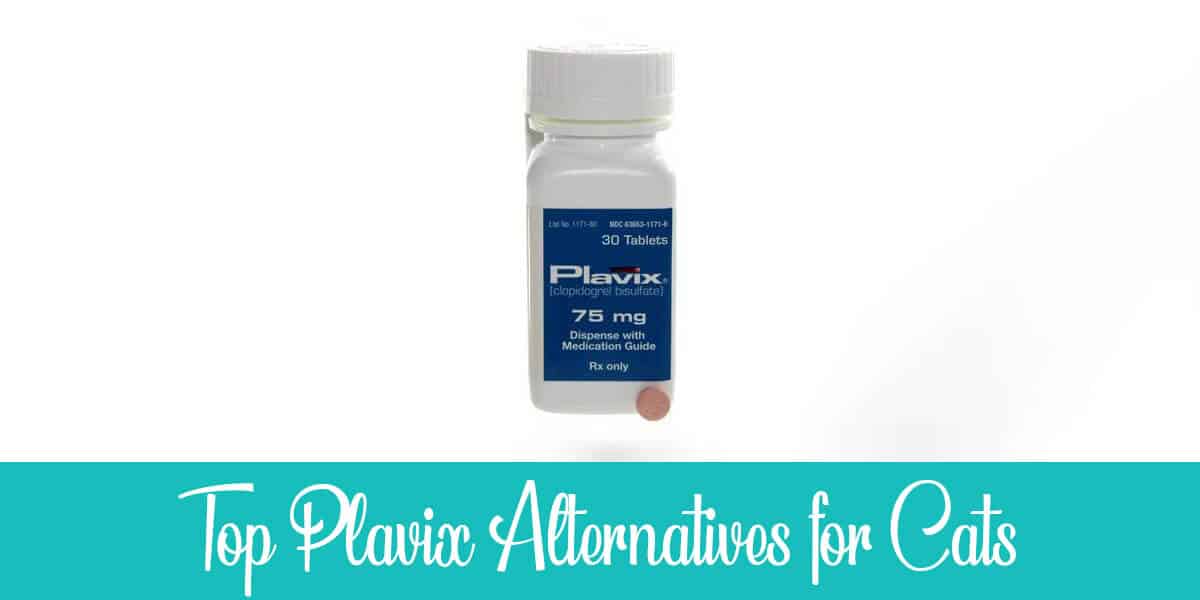 While different species might show many early signs of heart diseases like coughing or intolerance to high activity, it’s commonly called the “silent killer” of cats. Since they’re mostly asymptomatic to it until it’s in an advanced stage.

Even though there’s no actual cure for heart diseases in cats, there are still a few treatments that can be approached. However, common drugs don’t always satisfy the cat’s therapeutic needs encountered during the treatment.

Veterinary medicine is known to have lots of “off label” or “extra-label” prescriptions. With lots of vets prescribing Plavix, we’ll be going over what it does, as well as alternatives to Plavix for cats.

Alternatives to Plavix for Cats

Clopidogrel, sold under the brand name, Plavix, is an antithrombotic medication used to prevent clot formation, strokes, and heart attacks in humans with heart diseases or at risk of such events.

It’s also used for similar reasons, as one of the most potent platelet aggregation inhibitors, to treat cats from heart diseases as well as dogs and horses sometimes.

Hypertrophic cardiomyopathy (HCM) is the most common heart disease in cats. As The American Veterinary Medical Association (AVMA) states, it affects 1 in every 10 cats worldwide.

HCM is a disease where the heart muscles and walls keep thickening and weakening until it becomes too tight for the blood to stream freely. The heart then becomes less effective at blood circulation, most commonly to the lower limbs, making it harder for the cat to move as it ages.

There are many ways to treat HCM in cats depending on the symptoms observed as well as the cat’s overall health.

Here are a few main medications used to treat HCM other than Plavix:

While both drugs are very tolerable to cats and produce somewhat similar benefits. A recent study was done on 75 cats that had survived cardiogenic arterial thromboembolism (CATE) events. The study tested whether clopidogrel will reduce the likelihood of recurrence of such events.

The study found both Aspirin and Plavix to be beneficial to cats, with an incline towards Plavix being more efficient at reducing the recurrence of CATE. Another study suggested its later-on higher survival rate, where Plavix was proven to extend survival rates of cats for 8 months more than Aspirin.

One of the most common treatments for high blood pressure in general, the “water pills” or diuretics, are pills that help the body eliminate excess salt and water.

Furosemide is commonly used on cats with HCM accompanied with severe respiratory distress, and sometimes in cases accompanied by congestive heart failure (CHF), where it might need to be maintained for the rest of the cat’s life.

The medicine has a very rapid onset. Usually, within 5 minutes when injected intravenously or within 30 minutes if injected intramuscularly. It’s a perfect medicine to treat pulmonary edema due to CHF.

The first dose is usually 0.000032-0.000064 oz/lb (2-4 mg/kg) and is repeated within 1-2 hours. However, to avoid extreme dehydration, you should probably lower the doses once the respiratory rate decreases. In a few cases, it can be gradually discontinued if the cat’s conditions are stabilized.

Nitroglycerin is sometimes prescribed alongside Furosemide to treat edema formation due to HCM, where it’s safe to use and has its benefits; there are no studies to prove its efficiency or accuracy in treating such cases for cats. In either case, cats develop tolerance rapidly against it. It also might show even lesser effects during prolonged use.

The use of ACE inhibitors like Enalapril has only become common in recent years. They were usually avoided in fear they might worsen SAM accompanied by HCM. However, one study suggests that ACE inhibitors improve the quality of a cat’s life, as well as its survival rate.

A different study suggested that the use of Furosemide alone is much more beneficial in treating HCM. However, the study included cats with unclassified cardiomyopathy and both cats with and without SAM.

Beta-channel blockers are mainly used to reduce SAM in cats, slow the heart rate, and regulate the oxygen used by the heart to pump blood into the body.

Medications like Atenolol can be prescribed for such cases. However, there’s a prominent concern when it comes to cats with diastolic dysfunction, where a study claims that the use of Atenolol will reduce the survival rate of cats. So, beta-channel blockers should be reserved for cases with severe SAM or with cardiac arrhythmias.

Cats sleep almost 85% of the time. Their bodies are already capable of reducing sympathetic activity, sometimes even better than beta-blockers, which might make SAM appear more severe in a clinic than at home.

Even though controversial to use and might not have the most adept outcomes, calcium-channel blockers like Diltiazem will have no harm on cats when dosed around 75 mg every 8 hours.

It even shows less edema formation and a gradual decrease in the heart wall thickness. However, in said study, only a few cats had shown a reduction in wall thickness, making it difficult to tell if it’s the drug or just time.

Always refer back to your vet before administering any medications to your cat.

As cats get older and weaker, the chance of their heart getting weak increases gradually. While there are many different alternatives to Plavix for cats, still, every one of them has its own pros and cons.

Some vets might avoid medications in some cases and advise a better nutritional diet with nutrients like Taurine, L-Carnitine, or Omega-3 and lower activity levels to keep the heart at rest more often.

Finally, always remember to follow your vet’s instructions and never hesitate to discuss your pet’s treatment or ask for their assistance.