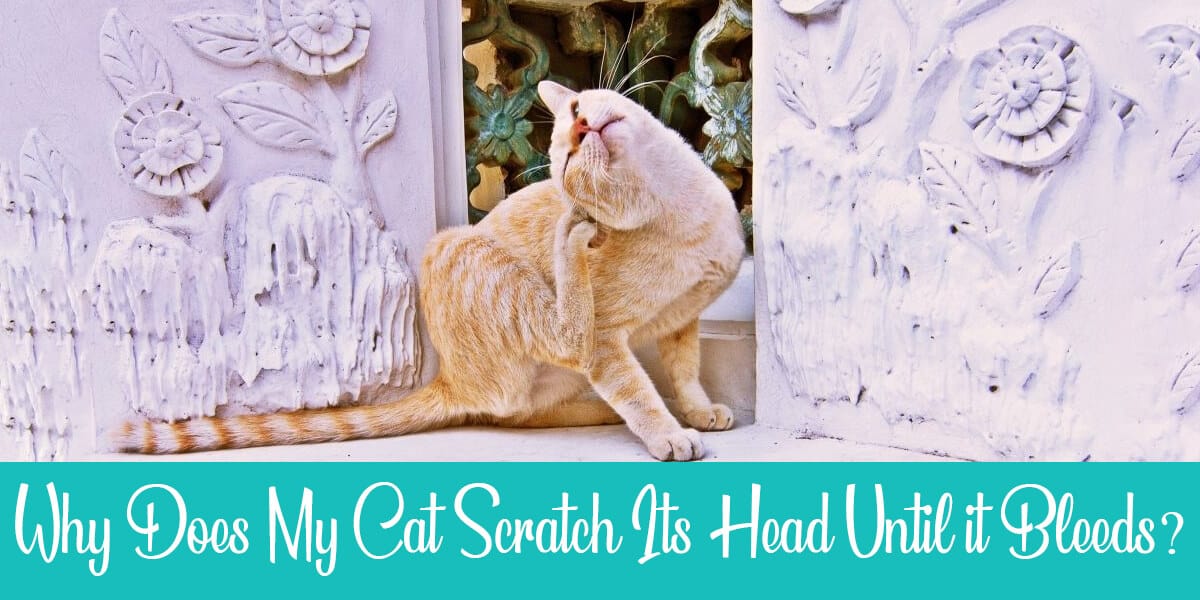 Do you ever catch your cat scratching its head until it bleeds? You try to shout “No, Mr. Fluffers! Stop!” But the itch is so bad that he ignores you completely and gets even more hurt before you can do anything about it.

The reason can’t always be fleas since cats live mostly indoors nowadays. We’ll discuss below some of the possible reasons why Mr. Fluffers scratches himself raw, and some of the ways you can help your cat alleviate the itch.

Why Is My Cat Scratching Its Head Until It Bleeds? – The Summary

Cats have a lot of natural defenses against injury, but even with their daily self-grooming routine, they can fall victim to fleas, mites, skin diseases, or even food allergies. They have a combination of sensitive skin and sharp claws, which makes it worse when they try to scratch their heads to relieve the itch.

What Are the Most Common Causes for Itchy Skin in Cats?

Here are the six most common reasons behind itchy cat skin:

Although they’re known for their meticulous self-grooming, a lot can hide under the fluffy coat of a house cat. They’re a very hospitable environment for fleas, which is the most common cause for pruritus (the medical name for itchiness).

Most house cats don’t go outside, but a single flea bite that made its way to a cat can cause it to go crazy scratching itself. Cats are usually allergic to flea bites and fleas themselves, which is unfortunate since they tend to ingest the fleas while grooming their fur.

Known asOtodectes Cynotis, they are an especially common cause for head-scratching in cats. These mites live inside the ear canal and feed on the cat’s earwax and dead skin cells. They have an orange hue and are as small as a dot.

When they infect a cat’s ear, they multiply quickly and sometimes cause debris to block the ear opening. You can check for them inside your cat’s ears, wearing gloves of course, and you’ll see an orange-brown accumulation that sometimes has black flaking of dried-up blood.

Just like humans, cats can be stung by a bee or a wasp or bitten by a mosquito. These tend to go for the bare skin on the cat’s nose bridge.

Since cats have very sensitive skin, the bites tend to swell up and can cause a reddish growth similar to an eosinophilic granuloma.

Cats won’t stop until they relieve their itch, so they might end up making their cheeks or nose bleed from scratching so hard.

Cats can be affected by some types of bacteria and fungi (yeast) that live on the surface of their skin. These infections usually present with loss of fur in the area that’s infected.

If your cat doesn’t have any fleas or mites and still scratches a specific area repeatedly, this might be the cause.

Atopy is found in both humans and animals. It’s usually an inherited condition where the person, or in this case the cat, is allergic to things that are found everywhere, like dust or pollen, which causes a reaction in their skin.

Unfortunately, this condition can’t be cured but some treatments can alleviate the symptoms.

Perhaps one of the most common reasons a cat has itchy skin after flea bites is food allergies. This condition can be found in cats from birth or develop as they get older.

Cats can be allergic to any kind of food, from grains and potatoes to specific kinds of protein. Dry cat food seems to cause more reactions than wet food that just has pumpkin or pureed vegetables as an addition to the protein, mainly because dry food has more grain content.

Users Also Read:
– Why is My Mother Cat Biting its Kittens?
– Will My Cat Get More Affectionate With Age?

How to Manage My Cat’s Condition?

First and foremost, you need to find out exactly what’s causing the itchiness. If it’s fleas or mites, or even an insect bite, it will be relatively easy to know the cause because you can see it with the naked eye.

Medication for fleas or mites can be found in over-the-counter (OTC) concentrations at most large pet stores. Make sure you ask for cat-specific medications. Dog medications are stronger and might hurt your kitty. But if the infestation is more serious, you might need to visit the vet.

The rest of the reasons might take a bit of a process to rule out what’s making your cat itchy. If there’s loss of fur away from where the cat’s claws usually scratch, your vet might prescribe an antibiotic or antifungal medication course to be followed for 3-4 weeks.

Unfortunately, when it comes to cats with allergies, blood tests and even skin-patch tests don’t give conclusive results. You can follow a diet trial that will eliminate all reasons for food allergies in your cat’s diet.

A diet trial means that for 4-6 weeks, you’ll stop serving your cat regular dry or wet food and start cooking a lean ground protein with a little salt, preferably a type your cat isn’t used to, like lamb or horsemeat.

If you notice improvement after the 4-week mark, start introducing cooked pureed vegetables, but steer away from potatoes as they are a known allergen.

Atopy is not curable in pets yet, but some treatments are available that might make the condition easier to live with.

Some vets recommend antihistamines, though they are less effective in cats than in humans. Probiotics and essential fatty acids are also touted for their benefits in reducing itchiness.

In some cases, corticosteroids are prescribed as a last resort. They weaken the body’s immune response and reduce the itchiness that comes from autoimmune conditions such as atopy.

Seeing your poor cat scratching its head until it bleeds might be surprising and a bit shocking. However, cats don’t think things through before they hurt themselves when they’re so itchy and uncomfortable.

Your job as a pet parent is to detect the reason and start treatment as soon as possible so there isn’t permanent scarring or a recurring wound when your cat scratches the scab.