As a cat owner, you’re probably familiar with how troublesome disposing of cat litter is. If you haven’t heard of the newfangled Diaper Genies, they boast about being smarter, longer lasting, and better looking.

However, they don’t mention if it works for cat litter. Curious if it really works? You probably want to know how it’s different from a Litter Locker as well, right? Well, let me share the comparison I created between the Diaper Genie for cats vs Litter Locker!

These two products are very similar in the basic principle of their purpose, and they share much of the same benefits, but they are just different enough to be distinctive in their functionality. So, let me show you the main differences.

The first noticeable difference you’ll see between the Diaper Genie and the Litter Locker is their size. 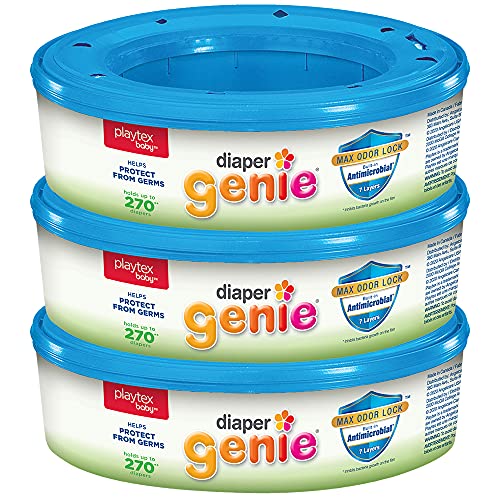 While the LitterLocker also comes in white, you can also purchase any of the four customizable sleeves to decorate your pail.

If you have limited space in your house, the LitterLocker may be a good choice for you. However, the height of the Diaper Genie and the hands-free design gives you the benefit of not having to lean or bend over a lot.

In addition, the size of the Diaper Genie gives you the benefit of not having to change the refill bags constantly.

Both the Diaper Genie and the LitterLocker claim to offer strong odor control, but there are important differences in these products to consider. 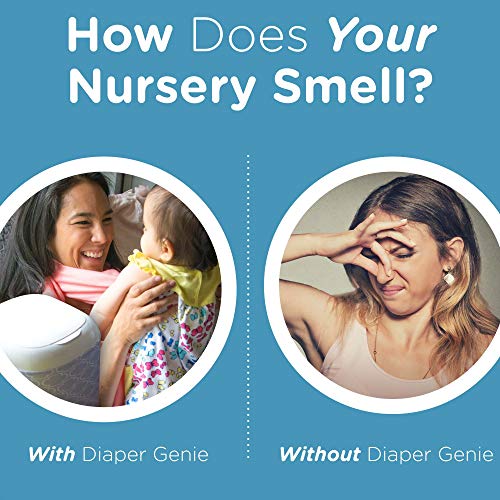 The Diaper Genie has double air-tight clamps that work with the antimicrobial properties in the bags and the pail to completely prevent any smell from escaping.

It also comes with a carbon filter to absorb all odors. Although you’ll have to replace the filter every month.

The LitterLocker uses a multi-layer barrier in its bags to lock in odors, keeping your house smelling clean. The pail also contains air-seal technology that helps contain the scent of your cat’s litter.

While both products provide odor control, the Diaper Genie provides more than just containing the smell. The carbon filter absorbs the smell, so you won’t have to worry about it lingering around the pail.

On your first purchase, both products will come with one refill pack, but you’ll notice different qualities to each one.

The Diaper Genie refills offer seven-layer protection refill cartridges, plus the refills can be scented too. Once you unclip the cartridge, you’ll notice that the color of the bag isn’t transparent but actually opaque blue.

What’s more, the Diaper Genie has built-in antimicrobial features. With both the pail and the refill having antimicrobial agents added, the germs have nowhere to go.

The refill cartridges can hold up to 270 newborn-size diapers and last for just about four weeks. 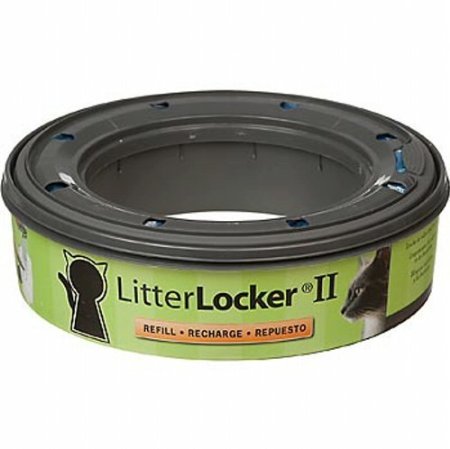 The LitterLocker hygienic refills have a multi-layer film barrier that blocks the smells from escaping. However, the bags are a bit transparent in color.

The refill cartridges can hold up to 14 days of cat litter, and each cartridge can last for about two months for just one cat.

The Diaper Genie may be your best bet if you’re looking for a diaper pail that has a carbon filter, seven-layer bags, and microbial agents to help control odors. The opaque coloring is also a plus because it may help to lessen your disgust at the sight of too much feces.

Here’s a tricky one: most companies will try benefiting from the price of the cartridges rather than the pail itself.

That makes sense, as you’ll have to buy new cartridges frequently but not so often that you get tired of your pail. So, pay great attention to the differences you’ll see in this part!

The LitterLocker is priced around $18 to $25. Keep in mind that this product is originally Canadian, though. So if you’re living in the U.S. and want to purchase the authentic product, you may have to pay some costly shipping fees.

What’s more, the LitterLocker refills cost about $15.99 each, which is almost double the price of the Diaper Genie’s refills.

If you plan to stick to a budget in the future, the Diaper Genie would be a more affordable option than the LitterLocker.

However, if you don’t mind spending a little extra on cartridges, maybe the LitterLocker wouldn’t be a bad choice either.

After carefully reviewing the two products, I must admit the winner here is the Diaper Genie.

The Diaper Genie has antimicrobial technology that allows it to last longer and keep odors contained.

It is larger in size, allowing you to dispose of your cat’s litter without having to change the bag as frequently. The hands-free design is also very appealing because there are no levers to pull. Simply place your foot on the pedal and drop the litter into the container.

In addition, the Diaper Genie takes odor control to the next level with its carbon filter that keeps smells from spreading. The scented refills are also a great touch!