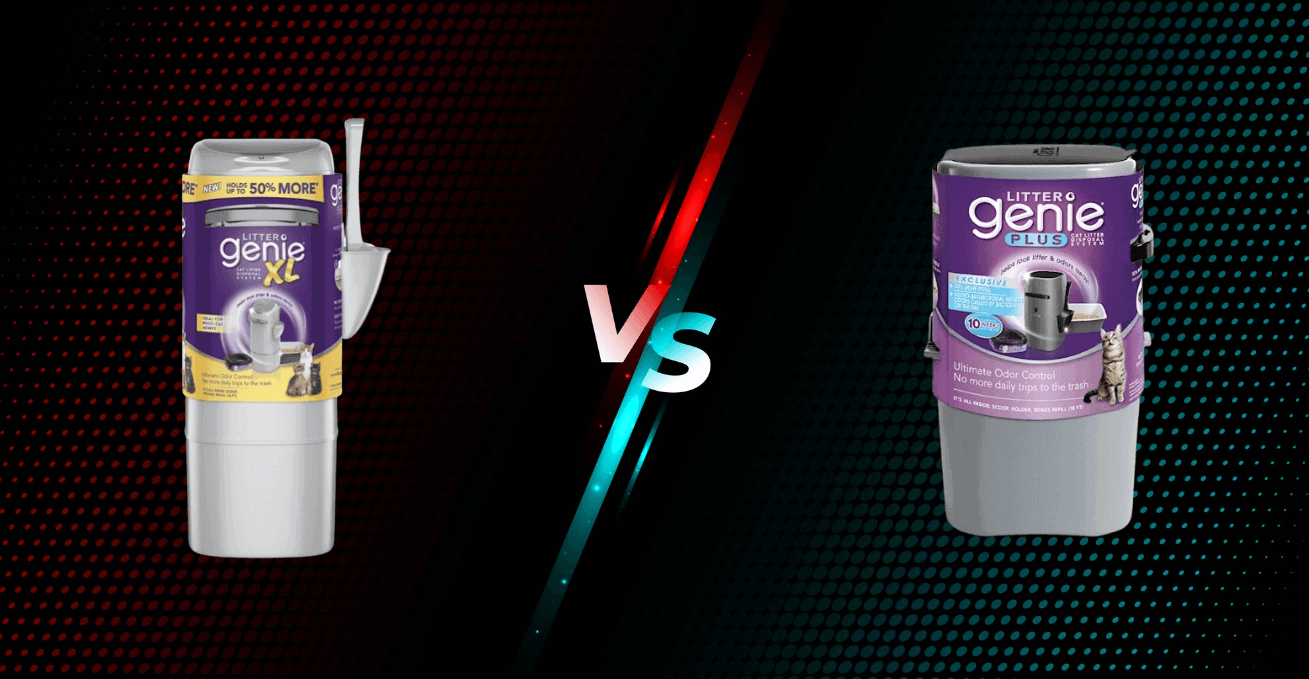 It can be incredibly time-consuming to clean up after your cat and ensure the litter box is kept in a sanitary condition. I’ll often find myself struggling to deal with the covered boxes, or I’ll completely give up on using a box and just see what happens with my cat.

Yet, I’ve discovered that Litter Genie can save me so much hassle with its ease of use and convenience. Now, it’s a matter of deciding which model to buy.

Let’s look at the following Litter Genie Plus vs. XL comparison so you can choose the right one for your needs.

Litter Genie Plus vs. XL Overview

The Litter Genie XL can hold your cats’ waste for 21 days, a whole week longer than the Litter Genie Plus. This means that it’s more efficient and doesn’t need to be changed as often. The built-in refill lasts up to eight weeks and can be replaced with Litter Genie standard refills. Also, the XL’s bigger size makes it a better choice for multi-cat homes.

Litter Genie Plus vs. XL Comparison 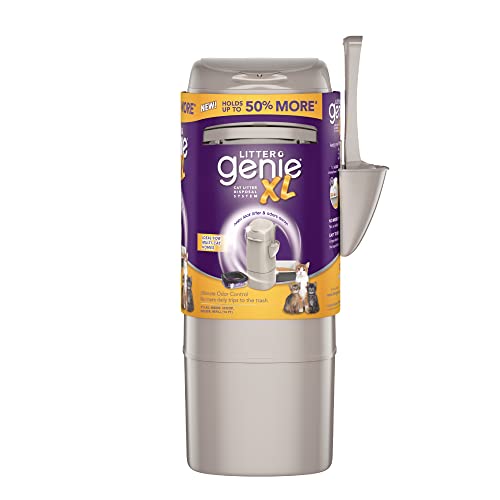 When comparing the Litter Genie Plus vs. XL, you’ll assume they both have almost the same dimensions. However, the XL model is actually 5.5 inches taller.

This might not seem like much of a difference as both can’t be filled to the top because of the refill canister. But the added height helps in making more space for your cat’s urine or feces.

Though both are similar in their design, the Plus model comes in two color options, silver and black, while the XL comes in only silver.

The company promises powerful odor protection in both its products. Both contain a multi-layer refilling option with a scent barrier technology, locking in odors and ensuring that the surrounding area smells as fresh as daisies.

However, only the Litter Genie Plus has antimicrobial additives built into the pail during the manufacturing process. This means an antimicrobial agent was added to the plastic to help either kill microorganisms or prevent further growth.

Note that the antimicrobial additives in the pail don’t stop the spread of bacteria or reduce it, but they simply prevent the release of odors from the feces. So, this shouldn’t stop you from regularly washing the pail to prevent any health risks caused by the bacteria.

One of the main differences between the Plus model and XL is the included refill cartridge that comes with the first purchase. The standard refill cartridge contains a 14-foot-long bag that can be tied and thrown out whenever you need to.

The refill bags are made with seven protective layers to provide you with an odor barrier that stops any scents from escaping. They also contain warning strips to show you when it’s time to change the bag.

But the downside is that it’s a one-time offer. The cartridge isn’t sold separately. After it’s finished, you’ll have to buy a regular refill. 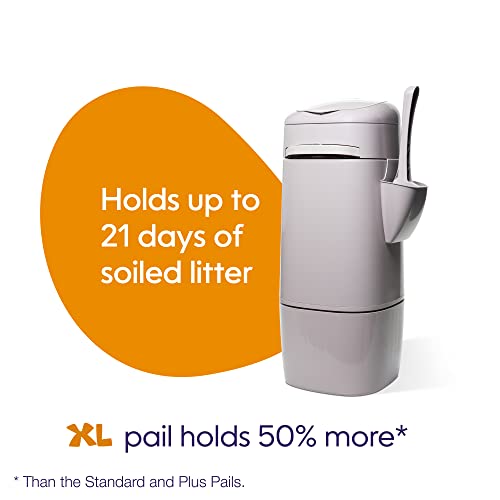 After discussing how long the cartridges last, you’ll start to notice another main difference.

When the Plus’s model refill is done, and you move on to using the regular one, you’ll see how its capacity for holding your cat’s litter isn’t as great as the XL model.

The Litter Genie XL can hold your cat’s waste for up to 21 days. Which is 50% more than the 14 days of the Plus model. If you don’t have a lot of time on your hands or you have more than one cat, the XL model might be the better option for you.

If you’re looking for a budget-friendly product that will help you keep your home clean and odor-free, the Litter Genie Plus might be it. It also comes with a cartridge that lasts 30% longer than regular cartridges.

On the other hand, if you don’t want to change the plastic bags as often or you have multiple cat friends, your best choice might be the XL.

How to Use Your Litter Genie Correctly

Many people fumble when using the Litter Genie for the first time. To do things correctly, here are the steps you should follow:

I know it can be hard to decide between similar products, but I hope that this article has answered any questions you may have about the Litter Genie Plus vs. XL.

Here are the main differences between these two products:

However, the XL’s built-in refill lasts up to eight weeks, while the one that comes with the Plus has a lifespan of ten weeks.

The bottom line is that the XL’s bigger size makes it a better choice for multi-cat homes. On the other hand, the Plus model can be more suitable for people on tighter budgets.