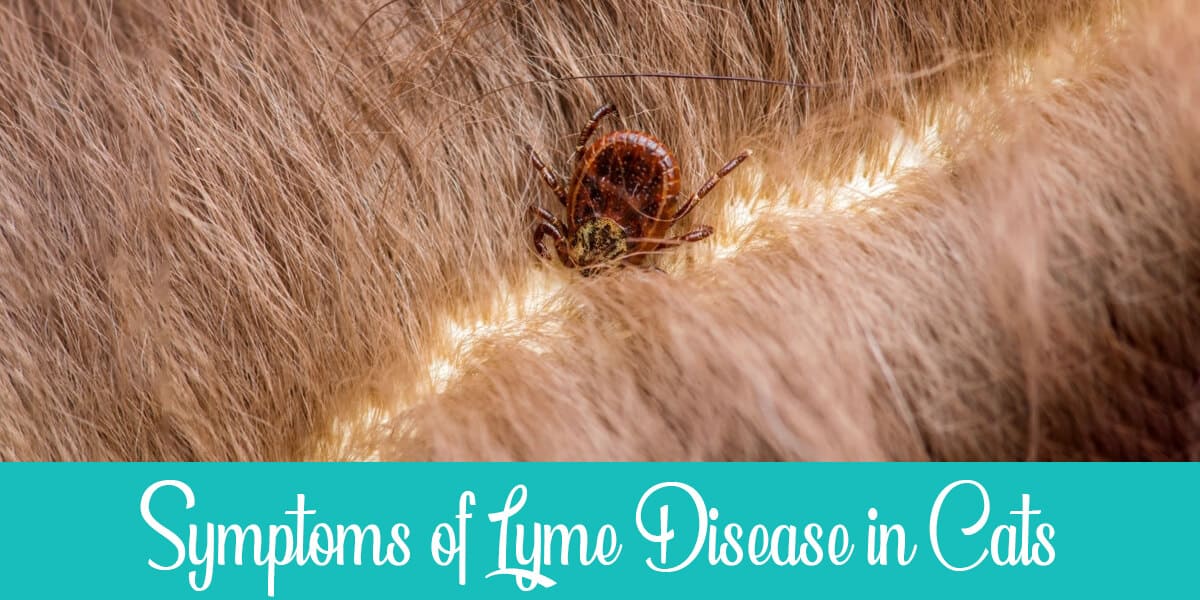 Caused by a bacteria called Borrelia burgdorferi, Lyme disease is possibly one of the most common tick-transmitted diseases. Within 36 to 48 hours of being bitten, ticks carrying this bacteria start to transmit this disease to the host animal.

While it’s uncommon and hasn’t happened outside of a laboratory, cats can contract Lyme disease. Thing is, however, cats can carry the disease for a long time without showing any signs.

That said, in some cases, cats can exhibit symptoms when infected with Lyme disease. In this article, we’ll dive deep into the most common symptoms of Lyme disease in cats and how early tell-tales of the disease can be identified.

The Most Common Symptoms of Lyme Disease in Cats

Common symptoms of Lyme disease that can be detected in cats include lameness in limbs, swollen and sensitive joints, lethargy, loss of appetite, breathing difficulties, and fever. In some rare cases, and when left untreated for long, Lyme disease can result in more severe issues, such as kidney problems, heart diseases, and neurological complications.

The most dominant symptom of Lyme disease in cats is lameness. Also referred to as limping, lameness is when a cat is unable to walk, run, or jump normally. It usually happens as a result of underlying issues.

Because Lyme disease can cause joint inflammation, an infected cat may start to limp or forgo using the limb that hurts. Lameness can strike one or several limbs. It can also come and go.

In some cases, shifting lameness can occur. Cats who experience this can have one limb bother them one day, then another limb will bother them after a couple of days.

When cats develop lameness, it can last between three to four days, disappear for a couple of days, then reoccur. Depending on the severity of the inflammation, lameness can be acute.

In most cases of lameness, the cause is joint inflammation. Lyme-infected cats experience swollen, stiff joints that are sensitive and painful. Sometimes, it can result in back-arching when walking.

If cats infected with Lyme disease are treated as soon as possible, there’s a good chance they will fully recover. Any swollen, inflamed, and sensitive joints can be treated rapidly. Sometimes, however, these symptoms may linger even after full recovery.

One of the common symptoms of Lyme disease is fever. This is a natural response that occurs as the cat’s body tries to fight off the disease. Cats can experience mild to high fever depending on how long they’re left untreated.

A cat that has a fever can suffer from shivering, rapid heart rate, decreased grooming, and fatigue. Combined with other Lyme disease symptoms, an infected cat may begin to show signs of depression.

Fever can also end up triggering other symptoms, such as lethargy and loss of appetite. What’s more, although a short-term mild fever won’t harm a cat, a rise in temperature above 106 degrees Fahrenheit can cause organ damage—sometimes permanent.

Related Posts:
– Does My Cat Suffer From Bug Spray Poisoning?
– Rat Poisoning Symptoms in Cats
– How to Detect Nasal Polyps in Cats?
– Signs of Toxoplasmosis in Cats

Lethargy in cats almost always indicates that there’s an underlying issue. As a result of the fever and joint inflammation, cats can get quite lethargic. You may notice general inactivity, abnormal sleeping patterns, and a lack of response to surroundings.

Another sign of lethargy is excessive sleeping. Although cats generally tend to sleep a lot, if a cat seems to sleep more than usual, it could be caused by lethargy.

Once Lyme disease is treated, a recovered cat won’t show any more signs of lethargy. It should be able to bounce back to its old life.

Loss of appetite in cats is a clinical sign that a cat is suffering from adverse health problems. For the most part, a cat that has contracted Lyme disease will lose its appetite. As other symptoms—such as fever—develop, the cat can suddenly stop eating.

It’s advised that any cat that loses its appetite suddenly should be brought to a specialist. The lack of eating can weaken the cat significantly, which will hinder the immunity system from fighting off the disease.

Lyme disease in cats can cause breathing difficulties, otherwise known as dyspnea. These difficulties may cause the cat to breathe and pant with its mouth open. Its nose will flare open, displaying rapid breathing.

Cats with breathing difficulties can start to cough and sneeze. It may have weepy eyes, lose its appetite, and suffer from fatigue.

In severe and rare cases, Lyme disease can create serious complications in cats if left untreated for an extended period of time. This includes kidney problems, heart diseases, and neurological complications.

If Lyme disease in cats isn’t treated, kidney problems might develop. Eventually, it could lead to kidney failure.

Cats suffering from kidney failure may exhibit symptoms such as loss of appetite, vomiting, increased urination, diarrhea, and weight loss. Also, fluid may start to build up in the limbs and under the skin.

Lyme disease can cause several heart conditions in cats. The infection could result in the inflammation of the heart muscle and conduction system. A cat with this condition can appear weak and lethargic.

Later on, this could cause heart failure due to inflammation.

If Lyme disease spreads throughout the cat’s body, it’s possible that neurological complications will occur. An infected cat can experience fatigue, limb numbness, and pain.

While this occurs in severe cases of Lyme disease, these neurological complications can become permanent.

For that reason, a cat that exhibits any symptoms of Lyme disease should be brought to a vet immediately. This way any permanent damage can be prevented.