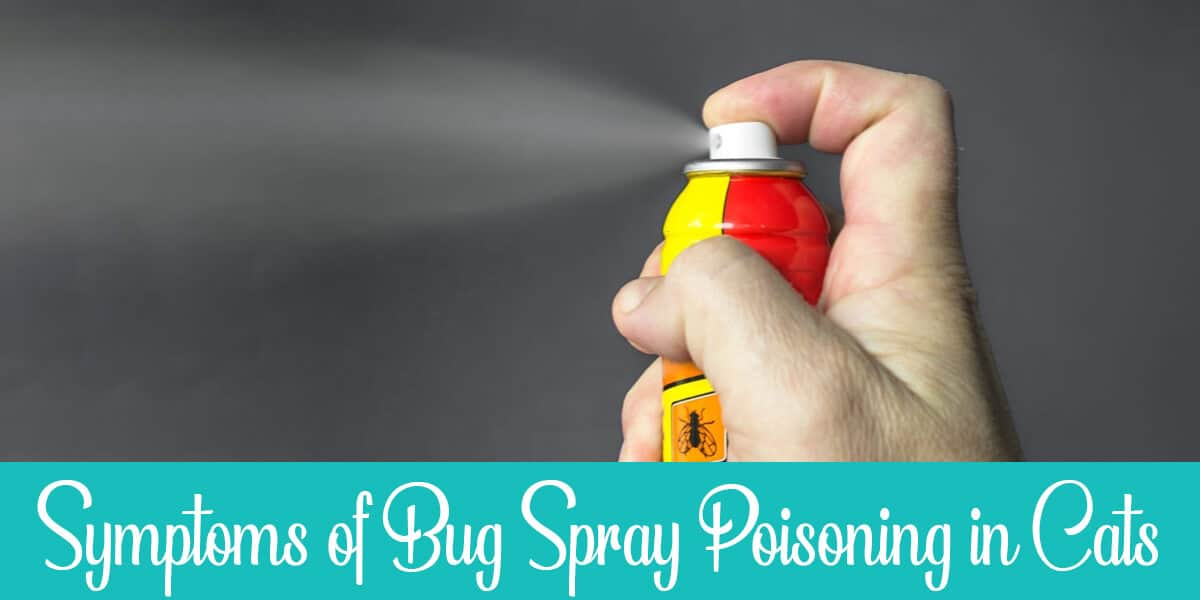 People often forget that pets have a different metabolism than humans. Just because we can tolerate the occasional puff of bug spray doesn’t mean that cats can.

Bug sprays typically contain an organophosphorus compound or a pyrethrin derivative. Both interfere with nerve impulses on a synaptic level, causing serious damage.

In some cases, bug spray poisoning in cats can be lethal!

In this post, we shed light on the different symptoms of bug spray poisoning in cats you should look out for if you suspect your precious feline friend has been poisoned. We also address how you should go about managing insecticide poisoning in cats, so stick around.

The Most Common Symptoms of Bug Spray Poisoning in Cats

Within a few minutes of ingesting organophosphorus compounds, felines start showing GIT disorders. It usually starts with vomiting and can escalate to extreme diarrhea.

Keep in mind that organophosphorus and pyrethroids don’t need to be ingested to be poisonous. Skin contact or inhalation might be enough to trigger symptoms in sensitive pets.

When we say “initial hyperexcitation,” it’s because the state lasts for a short while. It’s then followed by CNS depression. From here on, things are going to get a little complicated and might even seem a bit contradictory, so hang tight.

ACh is a neurotransmitter that helps conduct nervous signals in the body. When ACh is done with its work, AChE breaks it down and recycles it to be used one more time.

When insecticides inhibit AChE, cats get hyper-excited, as there’s too much ACh going around! When this happens, your cat will become overactive and anxious, and its heart will beat rapidly. But this hyperexcitability doesn’t last long; ACh gets depleted soon enough.

Organophosphates also work by stimulating the parasympathetic nervous system. This means that you’ll see an excess of bodily secretion all over in the form of tears, saliva, nasal secretion, phlegm, and frequent urination.

Besides being uncomfortable, constricted pupils make matters worse for coordination when walking.

Lack of coordination is a common sign of toxicity by pyrethroids and organophosphates. When a pet is exposed to AChE inhibitors, it’ll have difficulty walking. This is because insecticides impair the visual-spatial function in mammals.

Visual-spatial processing is what allows us to intercept where things are relative to our bodies. It helps send signals like “Move your index finger to touch this; it’s only an inch away,” or “Lift your right leg to take a step on the stairs.”

Related Posts:
– How Do I Know if My Cat Has Lyme Disease?
– Is My Cat Suffering Rat Poisoning?
– 5 Signs of Nasal Polyps in Cats
– Signs of Mercury Poisoning in Cats

By now, the initial stimulation starts to fade out. All that extra rush of acetylcholine is depleted. This time, though, no recycling takes place. Rather, the neurotransmitter reservoirs start to run critically low on ACh.

Since ACh is responsible for transmitting the nerve signals to the muscles, abnormal twitches can happen every time the cat tries to move a limb.

In extreme cases, the poisoned cat can start to experience full-body seizures.

The most serious complication in cases of bug spray poisoning is respiratory distress.

Low acetylcholine levels affect the smooth respiratory muscles. This is a similar mechanism to the tremors in skeletal muscles.

Breathing gets harder and harder when there isn’t enough acetylcholine for muscle contraction.

In the early stages, the best approach is to try to reduce the absorption immediately. If the bug spray was used directly on the cat’s skin, wash it thoroughly under running water.

If it was inhaled, get the pet into a place with good ventilation.

In ingestion cases, a vet can perform gastric lavage to empty the stomach. Activated charcoal is also an option for absorbing toxins.

In late cases, the insecticide has already been absorbed. At this point, any intervention is going to be pure symptomatic management in the form of:

In severe cases, oxime compounds can be used as antidotes. They do a great job of separating the acetylcholine from the neurotoxin. This allows the former to carry out its function once again.

Bug sprays are a common household item; so common that we forget how dangerous they can be.

When left in the reach of children and pets, insecticides can be lethal. A slight difference in liver enzymes makes cats more susceptible to insecticide toxicity than humans.

The symptoms of bug spray poisoning in cats start slow and then escalate quickly. Once the poison gets to a critical stage, it can be hard to stabilize the poisoned animal. That’s why it’s always advisable to avoid any contact between pets and organophosphates.

Seek professional help immediately if you notice any signs of poisoning on your pet.