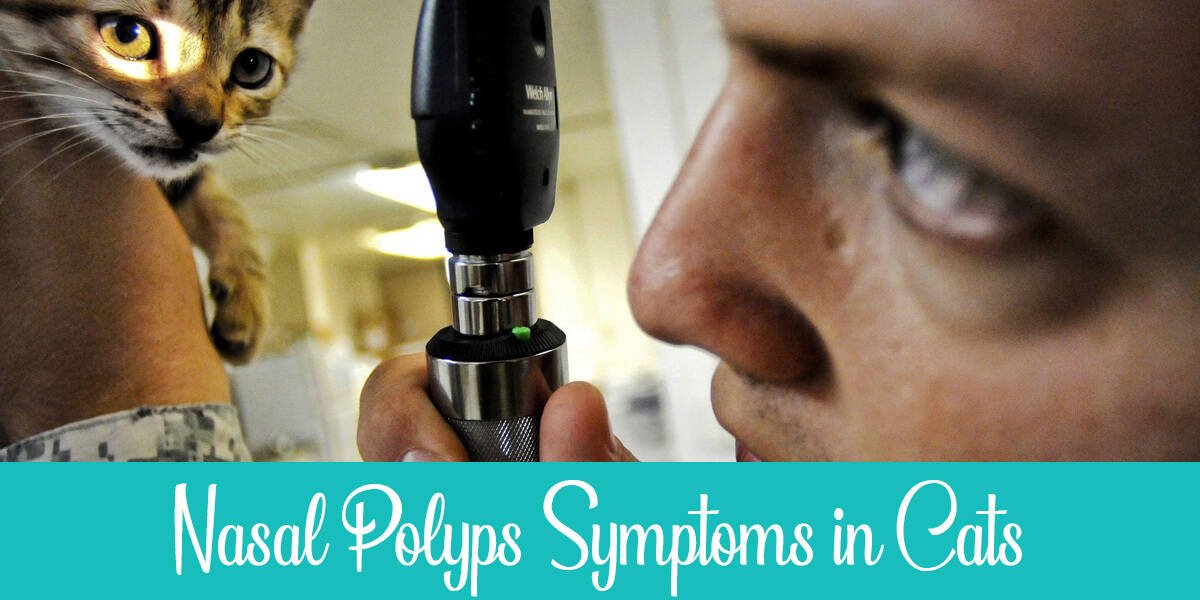 One of the most common conditions in young cats, and sometimes adults, nasal polyps can be a nuisance to those adorable pets. These fleshy growths are developed in the nasal passages of cats, making it harder to breathe, eat, and sleep.

Yet, the reason why these polyps are so tricky to detect is that their signs can go unnoticed. Therefore, you must be able to identify the symptoms of nasal polyps in cats correctly in order to solve the issue.

In this article, we’ll walk you through these telltale signs. So, let’s dive in!

The Most Common Symptoms of Nasal Polyps in Cats

Nasal polyps in cats are usually accompanied by trouble breathing, frequent sneezing, and nasal congestion. In addition to that, cats with nasal polyps tend to produce increased respiratory sounds that are pretty similar to snores. Other symptoms include difficulty swallowing, tilting the head to the side, pawing at the ears, and frequent ear infections.

Anyone can brush off a stray sneeze by their cat, right? Well, as long as it happens occasionally, chances are it’s a natural sneeze caused by dust motes or other typical triggers.

However, if your cat sneezes several times per day, or sneezes three or four times in a row, there might be a polyp in her nasal passages. The reason behind this is that the cat’s system will try to get rid of the stubborn blob blocking her airways by causing her to sneeze repeatedly.

Sometimes, cats might reverse-sneeze, which is a behavior where the cat will make a sudden honking sound in an attempt to clear her throat.

Decreased Airflow Through the Nostrils

Another telltale sign of a nasal polyp is the cat’s inability to breathe through her nose properly. A pet owner might notice their cat trying to inhale and exhale through the nose, then shifting to the mouth for easier breathing.

Luckily, there’s a simple way you can know for certain if your cat has trouble taking air in through the nostrils. All you’ll have to do is place an empty glass in front of her face and watch as she breathes into it.

Usually, at this point, a decreased airflow through the nose will be accompanied by constant snoring if the cat tries to breathe. So, if you notice all these signs at the same time, your best bet is to take your pet to the veterinarian for a check-up.

With no action taken, the polyp may continue to grow until it finds its way to the throat, which might cause more trouble.

If the polyp is big enough to reach the throat, the symptoms may become more pressing. For example, increased difficulty in breathing and swallowing are two major signs that no one should ignore.

In this scenario, the polyp may affect the cat’s ability to eat since it’s essentially blocking her throat. It’ll also make the cat restless and uncomfortable, making it harder to fall asleep. Oh, the poor thing!

Frequent Pawing at the Ears

Besides nasal passages and near the throat, nasal polyps can form in the cat’s ear canals, too. Here, the previous symptoms will be replaced by others that are related to the area around the cat’s ears.

One simple sign of trouble is continuous pawing at the ears. Yet, some people may mistake it for normal scratching or trying to brush off a nagging flea. So, how can you tell if it’s your cat being extra cute or if there’s something possibly wrong?

When paired with constant scratching at the ears and repeatedly tilting the head, ear infections can be major indicators of nasal polyps in cats.

Of course, we’re not talking about an infection that your cat may have had a year ago. Instead, if you’ve noticed that not a few weeks or months have passed before another ear infection, you’ll want to get your cat checked.

Waiting too long will cause the fleshy mass to keep growing, and it might pass to the eardrum eventually. Therefore, it’s always recommended that you take action right away if you suspect that there’s something amiss with your little feline buddy.

Besides the signs we’ve mentioned, the cat might show a few subtle symptoms, including:

What Are the Causes of Nasal Polyps in Cats?

Unfortunately, specialists are still unable to find something to blame when it comes to nasal polyps in cats, and so the causes remain unknown.

However, some theories claim that this condition is hereditary. Others believe that polyps develop secondary to chronic inflammatory processes.

The bottom line is, all cats are prone to this annoying condition no matter their age or breed. The only thing you should do here is to know how to identify the signs so that you can act accordingly.

To Wrap It Up

Ever wondered what the symptoms of nasal polyps in cats are? Well, if you have, we hope that this article helped you out.

To sum it up, the signs of a nasal polyp mainly depend on where it’s formed. If it’s in a nasal passage, cats will end up sneezing a lot, breathing noisily, and not releasing much air when exhaling.

In some cases, cats that suffer from polyps may find it difficult to swallow and breathe. This usually happens if the polyp is near the throat.

Now that you know all the red flags, it should be a breeze to detect trouble from a mile away!