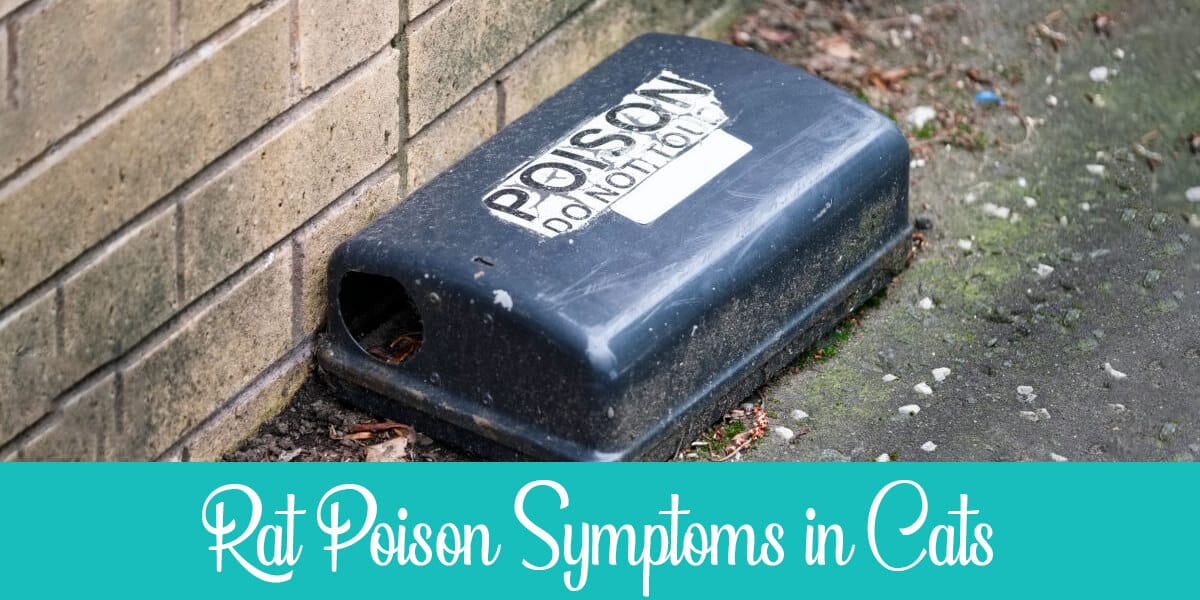 When there are indicators of a rat infestation, homeowners will try to get rid of the infestation using the quickest and easiest solutions they can find.

Some homeowners resort to glue traps and snap traps, whereas others resort to rodenticides, which happen to be the most popular solution.

What many pet owners aren’t aware of, though, is that rodenticides can be dangerous to pets, especially cats. They can cause serious health implications and, in some cases, can be fatal.

That said, as a pet owner, it’s important that you be aware of the symptoms of rat poisoning in cats so that you can act quickly if you suspect that your cat has been poisoned.

The Most Common Symptoms of Rat Poisoning in Cats

Symptoms of rat poisoning in cats may differ based on the type of rodenticide consumed. The most common symptoms, however, are weakness, depression, diminished appetite, vomiting, and bloody or dark stools. Cats might also have neurologic difficulties if there’s bleeding in the brain or spinal cord. It’s crucial to detect and treat these symptoms immediately.

Causes of Rat Poisoning in Cats

Ingestion is the most common cause of rodenticide poisoning. Cats may unintentionally consume rat poison out of hunger or mere curiosity (direct ingestion). They may also hunt and eat a rodent that has consumed rat poison (secondary poisoning).

Rat and mouse poisons consist of a toxic substance called bromethalin. When ingested, it can cause cerebral edema: a buildup of excess fluid in the brain.

It can also cause a major increase in the pressure of the cerebrospinal fluid. This can cause a number of neurological symptoms, like muscular tremors, seizures, and restricted movement.

Symptoms of Rat Poisoning in Cats

If you suspect your cat has taken rat poison, take it to a vet immediately. Symptoms may vary depending on the type of rodenticide ingested, but here are the most common ones:

It’s critical to treat your cat’s loss of appetite. Even a period as short as 24 hours without food (12 hours for small kittens) can have a significant influence on their health.

The longer the anorexia lingers, the faster your cat’s health will deteriorate. This is why we recommend taking them to a vet immediately to start treatment.

Vets usually use one of two methods to treat this condition: fluid therapy or a feeding tube.

Your vet will provide fluids to your cat via an IV or injections beneath the skin to ensure that they remain hydrated.

The vet will give your cat an anesthetic and shave the area around the vein that will be injected before starting intravenous (IV) fluid therapy.

This feeding technique prevents food from passing through your cat’s mouth. Food that has been liquefied or softened can be injected directly into the cat’s digestive tract.

This is considered a good strategy since the cat won’t be able to develop any negative feelings with food in its mouth, and will instead gradually eat on its own.

Yes, cats can experience depression, but not to the same degree that people do.

Although feline depression isn’t dangerous, other symptoms caused by depression, such as anorexia, can be fatal.

The following are some symptoms of feline depression:

Cats vomit every now and then, but a popular misconception is that vomiting is a typical part of cat behavior. Vomiting regularly or repeatedly isn’t normal.

Cats can vomit for a variety of reasons. Sometimes it’s because they’ve eaten too much or consumed something inedible.

It’s crucial to look for additional signs and symptoms to see if your cat has ingested poison. And If your cat is repeatedly vomiting, take them to a vet immediately.

Bloody stools, also known as Hematochezia or melena, are blood mixed throughout the stool, at the tail end of the stool or, in severe cases, the entire stool. They’re usually a common symptom of feline rat poisoning.

Melena generates dark, tarry stool as a result of digested blood from the upper gastrointestinal system (the stomach and small intestine).

There are a variety of reasons your cat’s stool may contain blood, and many of them are simple to cure. Although many of these conditions are minor, some are life-threatening and require immediate medical attention. It’s always best to consult a vet.

Seizures, which are caused by aberrant electrical activity in the brain, can result in worrying behaviors such as writhing, drooling, panting and teeth chomping.

Because seizures are usually brief, you may not see your cat undergoing one. Nevertheless, you may notice strange behavior after a seizure, known as the postictal phase. Your cat may display excessive weariness or excitement, excess eating and drinking, or erratic pacing.

If you detect any of these symptoms, please consult your vet.

Treatment for Rat Poisoning in Cats

Treating your cat as soon as possible reduces the risk of serious poisoning.

Your vet may force your cat to vomit if the rodenticide was consumed within a few hours before treatment. You should never try this at home, though.

After controlling the vomiting, your vet will utilize activated charcoal to reduce the rodenticide’s absorption into the gastrointestinal tract.

Vitamin K1, a prescription medicine, is the antidote used to treat rodenticide poisoning. It helps enhance vitamin K1 levels in the body and prevents bleeding. It’s either injected or taken orally as tablets.

Many people use rodenticides to get rid of a rat infestation, but what they don’t realize is that rodenticides are harmful to pets.

Cats can accidentally ingest rodenticide if it’s mixed in with their food, or they can hunt down and devour an infected rat or mouse.

Symptoms of rat poisoning in cats may vary depending on which poison your cat ingested. The most common symptoms are weakness, depression, reduced appetite, vomiting, and bloody or dark stools.

If your cat is displaying any of these symptoms, please consult a vet immediately.