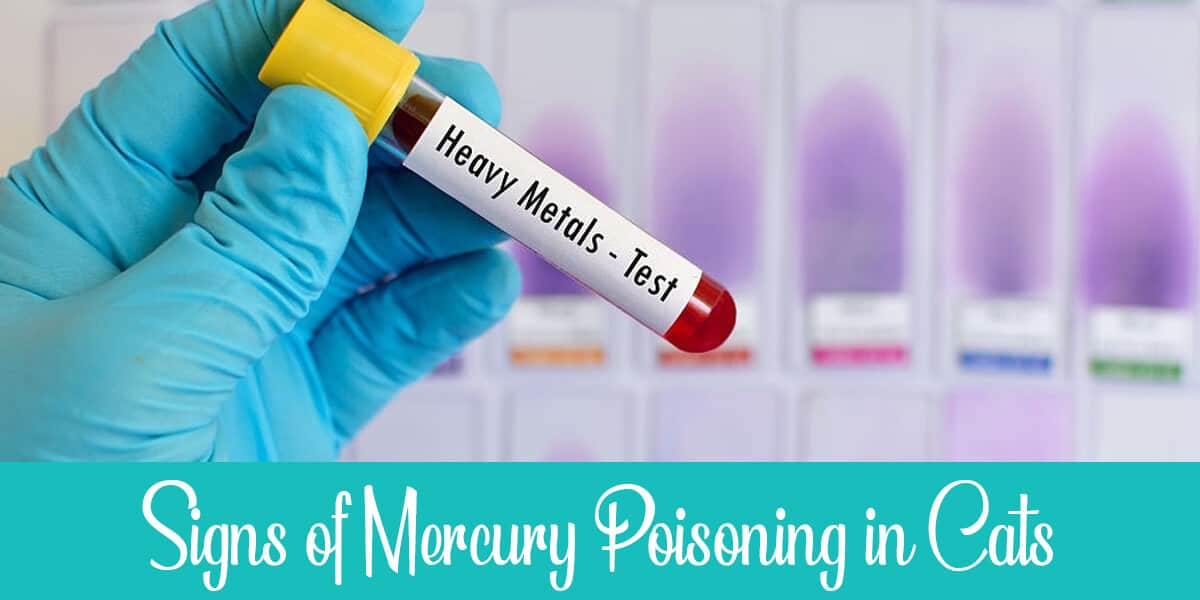 Mercury has always been a common cause of poisoning symptoms for both humans and cats. Sadly, mercury can be found abundantly in birds and fish. Also, it can be absorbed by the soil, which can result in crop contamination.

Because cats are huge fans of fish—tuna, in particular—they’re more susceptible to mercury poisoning than humans.

Whether you’re feeding your cat tuna or small fish, ingesting too much mercury could be lethal. For that reason, many pet owners are forced to avoid feeding their beloved cats fish altogether.

On the bright side, the concern doesn’t come directly from the occasional consumption of wet or dry fish-based food, seeing as most of these food products are tested for low levels of mercury contamination and are safe for cats in moderate amounts.

The Most Common Symptoms of Mercury Poisoning in Cats

The initial signs of mercury poisoning are usually less noticeable and could be very similar to vitamin B deficiency symptoms. They include misbalance, difficulty in walking, and incoordination. Those symptoms are the reason mercury poisoning is also called the dancing cat disease.

With just these symptoms surfacing, your vet might find it difficult to relate your cat’s condition to mercury poisoning. Other symptoms that could alert your vet include:

Your cat might also show signs of difficulty breathing, or other breath irregularities.

Cats could develop severe symptoms of mercury poisoning after getting exposed to foods with high levels of mercury for a long period. Those foods include shellfish, tuna, king mackerel, and swordfish.

The most concerning part when it comes to severe mercury poisoning is that it could lead to diverse neurological symptoms that could be permanent for your cat.

Young cats that are still in their developing stages are especially vulnerable to that kind of poisoning. They can easily develop immune-system deficiency and suffer severe symptoms. That said, you must take your cat to the vet the moment you suspect cat poisoning.

Symptoms of Kidney Disease Caused by Mercury Poisoning in Cats

Mercury is linked to a large number of kidney diseases in humans. It’s the cause of most of the major kidney failures.

In cats, mercury accumulates in the kidney, causing impaired kidney functions. Cats that are over ten years of age experience complicated side effects that could lead to total kidney failure.

The common sign of kidney dysfunction in cats are:

Treatment of Mercury Poisoning in Cats

Mercury poisoning poses a serious health risk to your cat. The damage done to the neural system is irreversible through treatment. However, if you catch the symptoms early on, your vet will prescribe charcoal tablets and other medications that will limit the absorption of mercury.

Your cat might also need additional vitamins, including vitamin E and selenium. They limit the damage done by mercury and increase metabolism and thyroid function.

That kind of treatment aims to remove as many toxins as possible and help your cat get back on its tiny feet quickly. It could take up to four days of continuous treatment to get rid of most of the toxins circulating in the blood.

Once that treatment is successful, your vet might also prescribe some penicillamine to reduce further signs and help the cat’s immune system function properly once more.

Protection Against Mercury Poisoning in Cats

The main culprit behind mercury poisoning in cats is the widely available commercial cat food. Because animal food regulation laws aren’t as strict as those that regulate human food, you’d often subject your cat to a big amount of heavy metals without even noticing.

For that reason, it’s safer to carefully examine the labels of certain canned foods before feeding them to your cat. If you find that the food has a large amount of shellfish or tuna, you wouldn’t want to regularly feed it to your cat.

However, preventing your cat from eating fish at all isn’t an optimal solution. It would subject the cat to malnutrition as fish carry multiple important vitamins for cats’ wellbeing. A good rule of thumb is to feed your kitty fish a maximum of two times a week to avoid unnecessary mercury exposure.

Mercury poisoning is a scary issue that puts the life of our pets in danger. Cats are especially more liable to that danger, as their diet normally carries a huge amount of fish.

Mercury poisoning won’t appear after the consumption of a small amount of fish, so avoid constantly feeding your cat raw fish, canned tuna, mackerels, or other types of cat food that contain a large amount of mercury.

If your cat is experiencing any of the above symptoms, taking immediate action is necessary to prevent further complications. At the sight of any of these symptoms, it’s important that you take your cat to the vet as soon as you can.

If your cat is indeed suffering from mercury poisoning, your vet will prescribe charcoal tablets and other medications that will help limit the absorption of mercury. The veterinarian might also prescribe vitamins such as vitamin E and selenium.