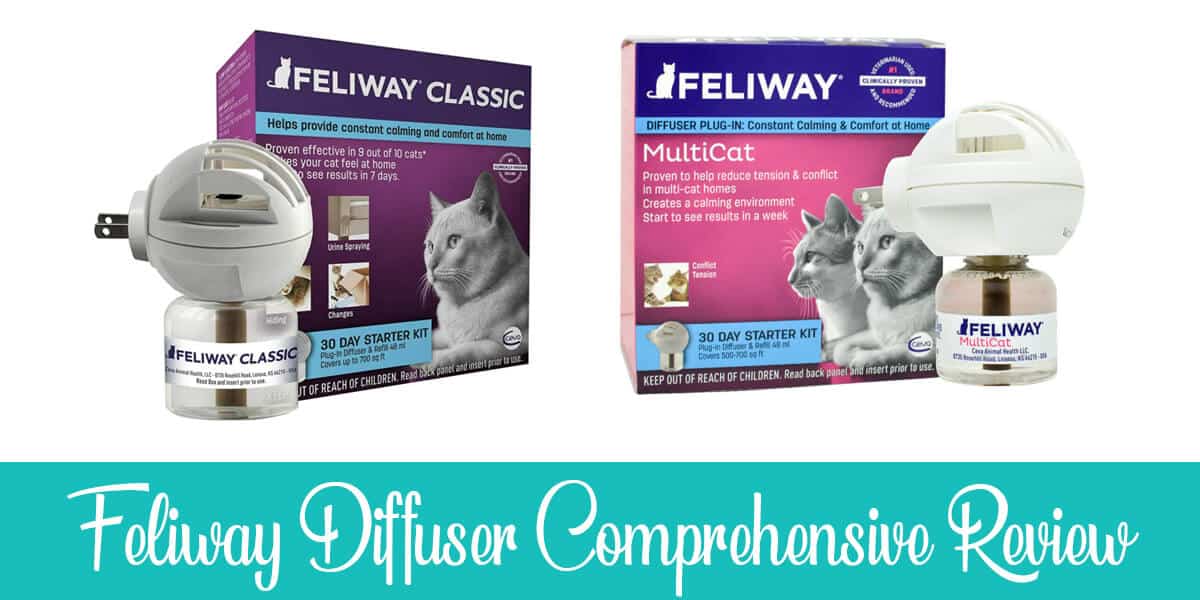 Have you ever heard of aromatherapy for cats? You have now! Imagine chilling at home, meditating alongside your perfectly well-behaved cat. Sounds nice, doesn’t it? This Feliway diffuser review will tell you everything you need to know about a cat’s version of meditation.

Feliway products are increasingly popular in the cat market right now, and Feliway diffusers are no exception. Why should they be? They’re basically the dream of every cat owner.

The question is whether your dream will come true by investing in Feliway diffuser or will it remain unattainable?

Simply put, pheromones are the language of cats. They’re natural chemicals released by your cat when it’s safe, comfortable, and happy.

Cats release these pheromones several ways, including when they rub their head against you, scratch their faces against a surface, or, every cat owner’s all-time favorite, their kneading massages.

By releasing pheromones, they’re basically marking this space, object, or, well, you as their safe and happy place.

When a cat’s scared, it also releases pheromones. These fear pheromones are to tell other cats, or us sadly enough, that they’re scared.

This is where Feliway comes in; it contains a synthesized version of cats’ happy pheromones.

Since behavioral issues in cats can be traced back to unhappiness or emotional distress, unless they’re physically unwell, smelling a scent associated with happiness and safety ought to do the trick.

Pheromones, and Feliway by association, can’t be smelled by humans. It’s a scent unique to cats and cats alone.

Feliway is clinically proven. Clinical studies have deemed it safe to use and effective. It’s also been approved by Valarie Tynes, DVM, DACVB, Board Certified Veterinary Behaviorist.

Several vets actually prescribe and recommend using Feliway too. As a matter of fact, it’s said to be good for cats that are old, sick, or skittish. If you artificially place these pheromones, they wouldn’t have to go through the effort of doing so themselves.

Up till now, there are no known side-effects to using Feliway products. It’s safe to say that it’s risk-free!

The only potential danger to using Feliway could be overlooking a serious problem.

A cat’s behavior is its way of telling you how it’s feeling. If a cat is peeing where it shouldn’t, for instance, it could be trying to tell you that it’s upset or that it’s not feeling well.

Ignoring the signs and going for Feliway straight away could make the situation worse. If your cat’s really sick, you would be tricking it into thinking everything’s fine when it’s not.

Feliway doesn’t actually solve the problem underlying behind its behavior. It’s basically cat-talk for “everything’s okay,” only it will likely believe it.

Therefore, to use Feliway safely, you should consult your vet first. Make sure your little buddy isn’t facing any health-problems before trying to change its behavior.

Now, here’s where a lot of people disagree. Some will tell you it works, others will say it’s useless. Who’s right? Well, both and neither. Confused? Hear us out.

If Feliway wasn’t at all effective, we wouldn’t be talking about it now, would we? Its infamous reputation is there for a reason.

If you’ve done your research then you’ve seen thousands of people raving about Feliway diffusers and their results. There are thousands of success stories out there and a lot of testimonials can be found on their website alone. It’s also vet-approved!

There are also studies that prove Feliway works.

We can’t deny that there are also those who’ve used it and had zero results. There are also studies that show a lack of success.

This is why we can’t say who’s right and who’s wrong; they’re both legit. The only logical explanation is that Feliway diffusers, and its other products, don’t have the same effects on all cats.

While it works sometimes, providing “magical” results, it might fail too.

We can’t tell you for sure that it’ll work; you’re going to have to try for yourself and wish for the best. What we can do, however, is reassure you that the numbers are in your favor. The positive reviews outweigh the negatives, which means you might be one of the lucky ones!

How to Use Feliway Diffuser

It’s really important to follow the directions closely. A lot of the people who claim that Feliway doesn’t work didn’t.

The first thing you should do is locate the right spot. Choose a room where your cat spends most of its time, or where a recurring problem usually occurs.

Make sure to plug your diffuser where it won’t be hidden by furniture or curtains. Avoid plugging it near air conditioners and windows for optimum results.

Your diffuser should be on all day long for 30 days straight. This is how you guarantee the best results. You should start seeing change after 7 days of starting the diffuser. Don’t be discouraged if it doesn’t work sooner, it’s pretty normal.

Why Feliway Diffuser Is Special

Here’s why you should consider going for a Feliway diffuser.

Benefits of a Diffuser

Using a diffuser is the best option if you need Feliway for a purpose that’s not specific to a certain area.

For instance, if the problem is your cat’s anxiety, the presence of pheromones in a room will make it feel safe there. The diffuser covers 70 square feet, which means it can cover a whole room.

Not to mention, having a diffuser that’s on all-day-long means the ultimate comfort for your cat. It’s not something that you have to reapply every couple of minutes, it’s ongoing.

You could opt for several diffusers if need be. This way you’ll cover your entire house.

Your diffuser has run out?

Feliway Classic is the most commonly used formula. It has multiple purposes.

The pheromones used in Feliway Classic provide your kitty with a sense of security and contentment.

Upon sniffing it, your cat should feel at home. These “happy messages” help to ease your cat’s anxiety. If your cat is anxious or feeling unsafe, Feliway Classic is the way to go.

This prevents antisocial cats from hiding out. It wouldn’t need to, once it gets a whiff of the smell of safety.

You can also use it to restore your cat’s appetite. If you’ve moved recently, for instance, your cat could very well refuse to eat. Not only would Feliway Classic make it feel at home, but it would also make it feel less sad so it’s likely to eat.

Stops Urination Out of Litter

If your cat is urinating outside of its litter and it has nothing to do with its physical well-being, the litter box, or unclean litter, then it’s likely a behavioral thing. It could simply mean your cat is upset.

Once again, Feliway Classic would lull your furry friend into a sense of happiness. After thoroughly cleaning the soiled spots and using Feliway Classic, your problem should be solved!

Here’s how to stop your cat from peeing outside its litter box once and for all.

Remember that destroyed piece of furniture that your cat has obliterated? Hopefully, it’ll be the last one.

Cleaning that furniture well and using Feliway Classic could communicate to your cat that this is its safe space. It could get rid of your furball’s need to scratch the life out of your furniture. It would already feel at home so there wouldn’t really be a need for marking its territory.

Overgrooming can be done when a cat feels stressed or from skin conditions. This can cause loss of hair and bald patches. Feliway Classic could reduce your cat’s excessive grooming habits so that it doesn’t harm itself.

It’s safe to say everyone has an idea about how annoying cat-fights are. Few people actually know how truly horrible they are.

Aside from the fact that cat-fighting can cause disturbing noise and can be an inconvenience, it can actually be pretty scary. If the cats have no intention of stopping, it can even prove deadly.

Feliway Multicat aims to reduce and perhaps even eliminate this problem. The pheromones used are sort of like those a mommy-cat uses on her newborn kittens.

Mothers emit a certain pheromone so that her kittens get along well with their litter-mates. Siblings are, therefore, less likely to fight that other cats. Shocking, right?

Multicat aims to eliminate any tension between your kitties. It can prove quite useful if you have a new furry member of the family and the OG won’t have it.

Now you know all there is to know about Feliway diffusers! Granted, they’re no slam-dunk, but can you imagine the potential benefits?

Using Feliway means you could keep your little kitten safe and happy, say goodbye to anxiety, and keep a house pee and scratch-free!

There’s nothing left to do but hit that button and wish for the best. You probably have your own diffuser, why shouldn’t your cat’s?