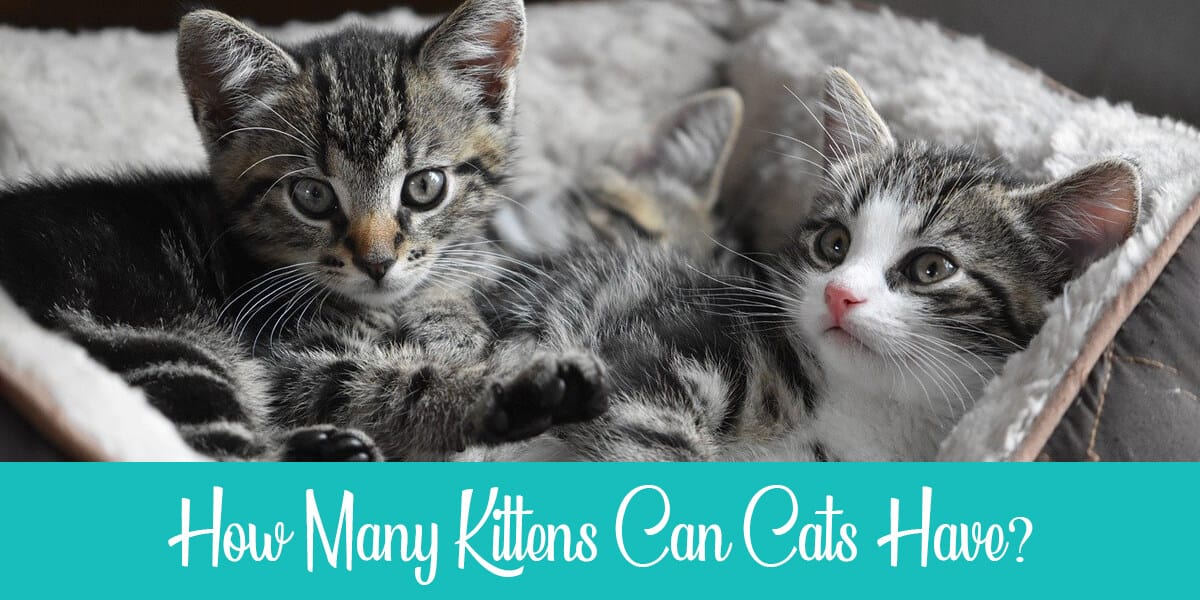 Disclaimer: Some of the links in this article are affiliate links; we will earn a commision, at no additional cost to you, if you make a purchase through one of our links.

We all have this cat lover friend who pets plenty of cats and every time we visit them at home we find new kittens added to the batch within short periods of time. How does that happen?

For those who are not into petting animals, or into biology, or both, comprehending the breeding habits of domestic animals can be a bit puzzling at first.

Unlike humans, animals produce multiple offsprings per time and they can give birth multiple times per year. Today, we’ll focus on the cutest and most cunning domestic animal of them all, cats.

We’ll be giving you all the information regarding how many kittens does a cat have in a lifetime, how many of them survive -yes, they might not make it- alongside the reasons and factors that affect such things. Let’s start.

Cats are pretty bountiful when it comes to fertility and breeding. To draw you a precise picture, let’s talk numbers. One unspayed cat and its offsprings can lead to 370,000 cats in a year!

Another shocking way to look at it is that 1 female cat can be responsible for a staggering of 20,000 kittens in a 5-year span. Insane!

There’s a broad range of how many kittens a cat can have per time. You can expect anything between 3 and 8 kittens. Some cats can give birth to 1 kitten, while others can have about 12!  There are a lot of determinantal factors when it comes to the exact number.

‘How many kittens do cats have?’ is a hard and tricky question because there’s no definite answer to it, it varies according to the breed, petting conditions, cat’s health, and age.

In case it’s not spayed, a cat can have up to 12 kittens per year. Some cat breeds like Ragdolls, Burmese, Mains coons, and Ragamuffins have an average of 6 to 8 kittens per litter.

So, let’s say that the average cat litter is about 3 to 4 kittens, and you can expect about 3 litters per year, if the cat is left to reproduce, of course.

Let’s take a deeper look at the reasons why litter sizes vary among cats.

Younger kittens tend to have smaller litter sizes. The same goes for first-time mothers. Both of them have around 2 to 3 kittens per litter.

When it comes to the breed, there are 3 distinct factors that come into play. How many litters per year the cat will produce, how many cats per litter, and how many of the kittens will survive.

Siamese cats reserve the top spot for prolific breeders. On the other hand, Persian cats, for example, have a small number of offsprings.

The health condition of your cat alongside its environment and petting conditions play a vital role in determining its litter size. You shouldn’t expect a big litter from a cat in a hostile environment.

The overall health and nutrition of the cat affect the number of ova it produces. It also affects the rate of fetal abortion. This can happen as a result of malnutrition, trauma, or infections.

Like humans, cats’ act of breeding induces ovulation. It’s not necessary that every released ovum is fertilized by a sperm and results in an offspring. Hence, the number of litters is proportional to the breeding encounters.

Moreover, a female cat can mate with several males, this too has a role in determining the number of litters, and the number of kittens per litter, as well.

Feline Infectious Pertinosis or FIP affects the cat’s ability to reproduce. Another more dangerous concern is infections that hit cats during their pregnancy, like Feline distemper and FPV that result in stillborn kittens or abortion.

How Many Kittens Can a Cat Have

Lucky for us, a cat’s litter size can be estimated by a veterinarian at 21 days gestation through an ultrasound. After 45 days, they can do an X-ray for a more accurate measure. It’s expensive, though.

The cheapest method for estimation, but not the most accurate one, is manual physical examination at 35 days of gestation.

Let’s take a walk down the hall of fame to check which cats are holding the Guinness World Records for the largest number of produced kittens. Yes, such a thing exists!

The most famous and most remarkable of them all is the South African Burmese cat that lived with its owner in the UK. In 1970, it gave birth to a 19-kitten litter, of which only 4 were stillborn, and 15 others survived.

Most Kittens in a Lifetime

Let me introduce you to the infamous Dusty from Texas. She managed to give birth to 420 kittens during her lifetime. The first litter was born in 1952.

Have you ever wondered what do cats eat in the wild? Disclaimer: it might be a bit shocking.

With time, as the cat ages, its litter gradually shrinks, and the number of stillbirths decreases too. Unlike humans, our feline friends don’t have menopause. So during the average 15 years of life of a cat, it can produce 4 litters of kittens annually. That’s a lot of kittens!

Not all of these kittens will survive, though.

What’s the deal with kittens’ death, then?

Most of the kitten deaths occur before birth or within the first week of life. It’s been reported that the percentage of kittens that are still alive after 8 weeks of birth is about 75% to 95%. The highest mortality is to be found among Persian cats.

The reason for this is that most of the symptoms of diseases that kittens get are similar, vague, and unnoticed. This makes them hard to spot, which leads to the death of the kitten eventually.

Here are some of these diseases that you might encounter with your kittens.

Newly born kittens demand a lot of energy but reserve very little of it. Their primary and only source is their mother’s milk. So, if the kitten doesn’t get its milk intake promptly, it’ll develop hypoglycemia, followed by seizures, then death.

You can imagine how this goes within a large litter, don’t you?

Despite being born with a high water content, kittens don’t have the ability to regulate water loss through their bodies. They’ll easily lose water through sweating, their kidneys, and lungs. That’s why it’s crucial to make sure your cat is always well hydrated.

Coupled with inadequate milk intake, this is a death sentence. If one of the kittens is sticking its tongue out or leaving its mouth open then this might be an indicator that it’s thirsty.

These kittens can’t regulate their body heat. Similar to the case with body water. Their primary source of warmth is their mother.

So, if the mother is not tending to keep them warm sufficiently, they might develop hypothermia and die.

A phenomenon known as Neonatal Isoerythrolysis results from an incompatibility between the mother’s blood type and its kitten’s blood type might lead to the death of the offspring.

Can a Kitten Get Pregnant?

For some, this might be a weird question. But for those who’re more familiar with cats, it’s a valid question.

Believe it or not, a kitten can get pregnant. Yes!

A sexually mature kitten that’s around 3 and a half months and 4.4 pounds of weight can have children itself. This can happen to her as early as in her first heat cycle.

A male cat can impregnate as many female cats as it can. Don’t get fooled into thinking that keeping your male or female kitten indoors will prevent them from impregnating other kittens or getting pregnant themselves. They are clever escapers.

So, if you have a male kitten, you need to keep a close eye on him. In the case of having a female kitten, getting her spayed would be the better solution.

How many litters can a cat birth in one year?

Simple math will tell you that a cat can get pregnant 5 times a year. Because a cat’s gestation period lasts about 10 weeks. Somewhere between 61 to 72 days.
Practically speaking, an average of 3-4 litters a year is more likely to happen.

How many kittens can a cat nurse?

Well, a cat should have enough milk for all its offsprings. This should suffice for 5 kittens on average.
However, if it managed to birth an exceptional number of kittens, it will need an external nutritional supply to feed the offsprings. Unfortunately, this is one of the reasons why some kittens die within their first week of life.

How long does a cat’s birthing stage last?

Anywhere between 2 and 24 hours!
The good news is that after the first kitten arrives, you can expect the rest to arrive within an hour and a half.

A cat can have any number of offsprings starting from 2 up to 12 kittens!

The most important factor though is to try and keep the most kittens alive, if possible.

Also, knowing when and how to spay your cat is crucial to avoid unnecessary overpopulation and to grant the wellbeing of the kittens.