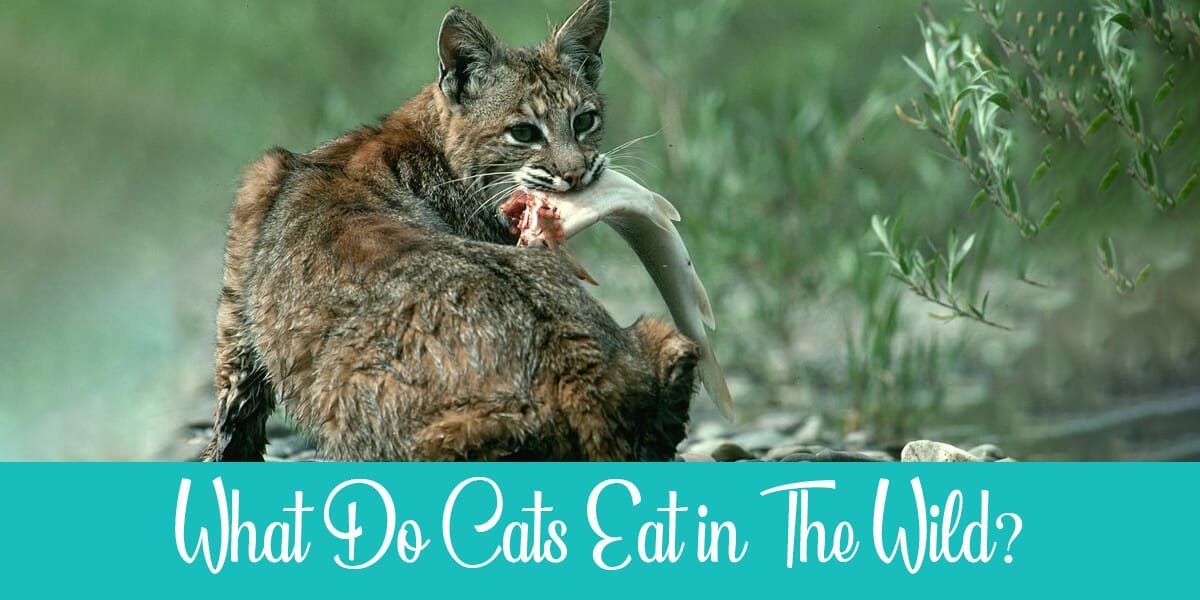 All cats, from lions to Tom from Tom & Jerry, fall under the category of obligate carnivores. This means that meat is essential for their diet. They simply can’t survive without it. We’ll discuss this in more detail as we go on.

But of course, to get a better sense of what cats naturally eat, we must look at wild cats. They are self-sufficient animals that fend for themselves and pick exactly what is needed for their bodies.

So you’re asking, what do cats eat in the wild? We’ve got all the answers for you within this article.

Why Do Cats Need Meat?

We mentioned that cats depend entirely on meat. That’s because cats’ bodies produce little protein on their own. Cats’ livers produce sufficient vitamin C, so they don’t really need fruits and vegetables with vitamin C that much.

Vitamin C, however, is pretty much the only thing their bodies produce. Their hunting skills and sharp instincts provide them with the rest. For that reason, cats usually eat their prey whole.

They don’t just eat for the protein in the meat, they get all the nutrients that their prey’s bodies produce too.

For example, cats can’t synthesize the amino acid, Taurine. Unfortunately for them, that amino acid is essential for eyesight and heart function. It’s also extremely important for growth, reproduction, and fetal development.

Fortunately for them, they can hunt. Taurine is mostly found in muscle meat, where cats get it from their prey.

Well, when we said cats eat every part of their prey, we meant literally every part, except, the guts. Cats get their B vitamins and minerals from the organs. They get their calcium from their prey’s bones as well.

Now that we understand why and how essential it is for cats to eat meat. Let’s take a look at how they hunt and eat in the wild.

How Do Cats Survive in The Wild?

Now that we understand why cats are obligate carnivores. We’ll see what are the other practical factors that come into their choices.

What Are the Factors That Affect Their Hunt?

Cats are practical. They will take advantage of all of their opportunities and hunt whenever they can and eat whatever they get. But, generally, there are several factors that come into play when it comes to what cats hunt in the wild. We’ll discuss each of them.

The variety of their prey, the cats’ needs, and their hunting skills differ according to where they live in the world.

European wildcats mostly depend on small mammals like rabbits, rodents, and birds. Especially poultry birds if they live near human settlements.

African wildcats, however, depend entirely on Murids, a rodent family.

As for hunting skills; a cat living near a lake and depending on fish and other sea creatures for survival won’t develop the same hunting skills of a cat in the desert.

Each location has its specifics that its native cats are in sync with.

Smaller cats focus on rodents, birds, and fish. That rule isn’t always followed though. And bigger ones, like lions and leopards, will focus on deer.

Lions, for example, can also hunt and eat giraffes and elephants. As it has a lot to do with hunting skills too.

Because of hibernating and other climate factors, the variety of prey changes from season to season. That affects the diet of wild cats. It gets them to adapt to the prey they could find even if it makes it harder for them.

The sex of the cat is a big factor when it comes to hunting. Contrary to expectations, female cats are both better at hunting and hunt more frequently.

This is logical. Because for female cats, there’s usually a potential litter coming up. So they need more food.

They also have to hunt faster and catch better prey to provide for their young. later on, she’ll be the one teaching them how to hunt. Cats usually start hunting for themselves around 6 months and sometimes even younger.

Male cats are usually good at hunting too when they have a mate or litter. This is why if you have a domesticated cat now, it’s more likely that she’ll instinctively hunt if it’s a female.

Social structure is an important factor as it affects the variety of prey. Depending on that particular location and animal society, cats would go higher or lower on the food chain hierarchy. That’s according to how many animals are below it on that chain.

That is also influenced by all the other factors like the size. For example, lions are usually on the highest levels of the hierarchy. That goes back to not just their size, but their social skills mixed with their hunting skills.

Most cats aren’t social animals. They’re solitary and that affects how they hunt as they’re loners and aren’t affected by the distribution of food in other animals’ circles.

So taking all those factors into consideration, we’ll take a look at what cats usually eat in the wild.

What Do Cats Eat in The Wild?

We’ve narrowed down the category of what cats eat in the wild. Those following living things are the most commonly eaten as preferred prey.

Rodents, alongside rabbits, are most likely the largest part of the diet of average-sized cats. They’re available in a lot of locations around the world and smaller than cats so they make an easy catch. Rabbits are also a major food source as they’re slower than cats.

Birds are also a major part of a wild cat’s food intake. The size of the bird correlates with the size of the cat. Bigger cats catch bigger birds. They exist in large numbers in most locations of the world and are easily caught.

Bats, considered small mammals, are also majorly hunted by cats. Cats who live closer to bat caves have bats as their main source of food.

Although squirrels present more of a challenge to cats than rodents and birds, they’re still a big part of a wild cat’s diet. A cat with advanced hunting skills can take a squirrel by surprise.

Cats get around that by sometimes only eating the head and leaving the body. In deserts, wild cats depend almost solely on snakes and other reptiles for food.

Frogs and toads are also a part of the wild cat’s diet. While not a first choice, they’ll still hunt and eat them if there’s nothing better.

Fish is also extremely relevant to location. They’re also harder to catch than on-land or flying animals. But wild cats living near lakes have fish as a major part of their protein intake.

Insects like grasshoppers offer wild cats a big intake of protein in certain seasons. They’re also non-poisonous to cats so cats safely hunt and eat them.

Another insect that cats seem to like is spiders, they’re usually safe to eat and in certain locations exist in abundance. Spiders are venomous, but they rarely have strong enough fangs to penetrate cats’ skins.

So generally, spiders are harmless except for a couple of types, like Black Widows or Hobo Spider

While not a nutritious source most of the time, cats still need it to clean their digestive systems of hairballs. They also purposely eat upsetting plants when they eat bad meat and need to get it out of their system.

Some of their favorite plants are grass, bean sprouts, and catnips. Catnips specifically are likable by cats, because even though they could cause diarrhea and other health issues, it has a sedative and euphoric effect on cats.

Should we feed our pet cats like their wild cousins?

Due to the recent health issues of cats and reevaluation of how we feed them now, people are starting to look back to what wild cats eat.
Not all cats are the same. They have their own preferences too. Raw food does have its benefits, of course, it is the natural nourishment for cats.  For example, cooking bones will take the calcium out of them and also make them brittle with sharp pointers.
However, if you make the choice to go that way, you should do it with carefulness. Like when feeding then raw meat, make sure it’s absolutely clean and from a good source like a butcher.
Also, don’t leave big bones in their food that they could choke on. Only bones that are easily chewed by them, like chicken ribs or wings.

We’ve explained the whys, whats and the hows of wild cats. They still remain absolutely fascinating with their effect on wildlife. It’s very interesting to see how their descendants are still close to them when it comes to hunting skills and instincts.

It’s also interesting to see that what cats eat in the wild is still relevant to the diet of domesticated cats.

Wild cats will hunt and eat anything they can get their hands on as long as it’s non-toxic.