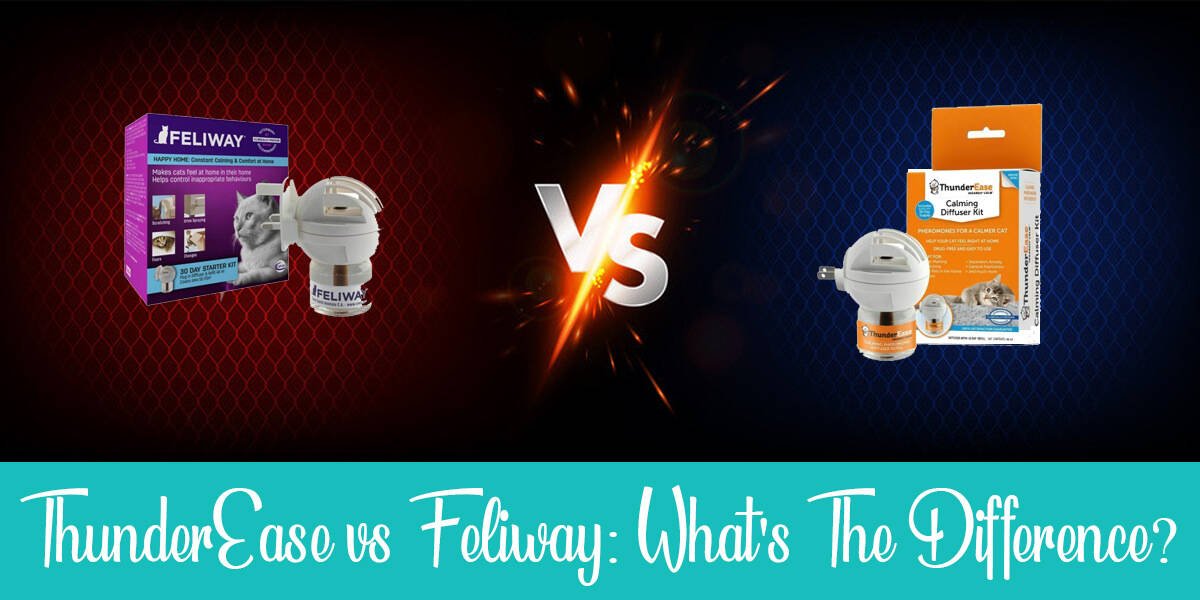 Cats can be quite a handful when their behavior is constantly getting out of hand: scratching, spraying, fighting, hiding; you name it.

That said, this article is going to cover two of the best-selling cat-calming products out there: ThunderEase vs Feliway.

So, if you want to finally calm your cat’s nerves, and calm yours along with them, then you’re in the right place.

In a hurry? Here’s a quick summary:

Without further ado, let’s dive in!

ThunderEase and Feliway are virtually the same: synthetic cat-calming pheromones. They’re even owned by the same company. The main difference between the two brands is that the ThunderEase diffuser is cheaper than that of Feliway. However, this doesn’t mean that Feliway is better than ThunderEase. Keep in mind that cats may respond better to one product than the other; you’ll have to try and see for yourself.

Cats emit chemicals known as pheromones all the time. It’s their way of stamping people and places as familiar and warm.

In both ThunderEase and Feliway, the active ingredient is synthetic pheromones that mimic the calming effect of natural ones. These two products share another similarity: they’re both owned by Ceva Animal Health.

I know you may be wondering, how can a product substitute a process as consistent as emitting pheromones? All of your worries will go out of the window once you get to know how simple it is to apply either ThunderEase or Feliway; their versatility will blow you away!

Both ThunderEase and Feliway solutions are available in two forms: sprayer and diffuser. Each of those has its functions and unique benefits.

The sprayer is a bottle that you use to apply the solution manually in areas your cat frequents. The diffuser, on the other hand, is plugged into an electric outlet near where your cat dwells, filling the room with calming pheromones.

If the diffuser is more convenient, why use the sprayer? Well, the sprayer is designed to be used on the go. We all know how cats get fidgety when traveling; they don’t take separation anxiety lightly!

Consequently, car seats are one of the common places where the sprayer is used. The diffuser, however, is stationary. So, its ideal place is the room where your cat spends most of its time.

The sprayer comes in handy when visiting the vet, as your cat will be subject to loud noises that can make it anxious and uneasy on the car ride. Luckily, ThunderEase sprayer specializes in alleviating anxiety caused by both travel and loud noises.

Feliway is no different in that regard, except that it’s recommended to apply the Feliway spray generously in order to get its full effect. During car rides, in particular, it’s advisable to re-spray once you exceed the 4-hour mark.

However, there are a couple of precautions to keep in mind when applying either ThunderEase or Feliway.

First, spraying the solution directly on your cat is an absolute no-go. You also shouldn’t let your cat near the sprayed area until 15 minutes have passed since you sprayed.

For Feliway alone, the no-spraying areas include the scratching post, because the solution will keep the cat from using it. Thus, your furniture will, once again, fall prey to your cat’s scratching.

If you have more than one cat in your household, you know exactly how cats can get fierce and competitive with each other.

That’s as they feel threatened when another animal is taking up some of your attention and care. So, they show signs like staring, chasing, fighting, and blocking.

Luckily, pet-calming brands like Feliway and ThunderEase have solutions for such problems. Let’s discuss them very briefly.

The ThunderEase multi-cat calming diffuser kit is one of the best products on the market for alleviating cat-on-cat tension.

See, there are specific types of pheromones that a mother produces in order for its baby cats to bond together. Tunderease multi-cat diffuser mimics these pheromones so that felines that were initially fighting will love each other like newborn kittens.

To maintain harmony at all times, Feliway’s Friends diffuser should be used continuously.

With Feliway, you’ll need to refill the solution every 30 days and replace the plug itself each 6 months. It also should be placed in areas where your cats sleep and rest, and not necessarily in places where the fights occur.

For maximum effect, you shouldn’t place Feliway’s diffuser behind furniture, or near doors. Near air-conditioners and windows is also a no-go, as the cool current of air can carry the pheromones away. Thus, the solution won’t last for 30 days.

If you’re wondering whether cat-calming pheromones can have an effect on other animals, the answer is no, it cannot.

If you have dogs in your household, you’ll need to get the dog-calming ThunderEase diffuser, which works in a very similar way to the one designed for cats. The main difference is that it produces pheromones that are specific to dogs.

Even though they won’t have any calming effect on dogs, ThunderEase and Feliway diffusers are safe and won’t harm them.

In terms of the sprayer, both Feliway and ThunderEase are virtually the same price: nearly $20. However, when we get to the diffuser, ThunderEase is significantly lower in price than Feliway. That’s as ThunderEase is priced around $16, whereas Feliway is around $30.

If you’re asking why then go for the pricier option? The answer will be because different cats respond to different products. If, for example, the conflict between your cats didn’t come to an end at the hands of the cheaper ThunderEase diffuser, it may do so using Feliway.

Can ThunderEase or Feliway Cause Side Effects?

Though the answer is largely no, it’ll differ depending on if we’re talking about cats alone or if we’re bringing humans and other pets into the equation.

No, cats won’t develop side effects due to the use of cat-calming products. Regarding Feliway, it’s been used for over 11 million cats around the world, and no side effects came up in the trials nor the extensive customer surveys, so it’s completely safe.

If you’re asking about how safe Feliway is for kittens, rest assured that there’s no minimum age for the safe use of Feliway. It’s also worth noting that Feliway is a vet-recommended product.

When it comes to humans, pheromone diffusers/sprays won’t have any undesirable side effects. In fact, the produced pheromones can only be perceived by cats. Humans mount no response whatsoever to them.

It’s also worth mentioning that Feliway adheres to the standards of European Norms (EN) and the International Electrotechnical Commission (IEC), so you have nothing to worry about.

Moreover, the packaging of Feliway is made of self-extinguishing plastic that poses significantly less risk of fires than other plastics.

ThunderEase, similarly, is completely safe for use around humans.

As relates to dogs, they won’t be affected. Caged birds and aquarium fish, however, are a different story. There are some birds with sensitive respiratory systems, such as budgerigars and parrots, which can be harmed by synthetic pheromones. So, it’s advisable to plug the diffuser away from them, preferably in an altogether different room.

Regarding aquarium fish, the synthetic pheromones filling the atmosphere of the room can descend on the surface of the water. Any chemical that comes into contact with your fish’s water isn’t a desirable thing. Just like with cage birds, plug the diffuser in a different room.

Much like babies, cats are adorable; stealing your heart the moment you set eyes on them. Being adorable isn’t the only thing they have in common with babies, though, as they can also be quite nagging.

This behavior can be mild, and thus normal, or it could be excessive, indicating a behavioral abnormality, like anxiety.

Here, products like Feliway and ThunderEase ride for the rescue. Both are synthetic pheromones that calm your cat’s nerves.

Which of them is better? Well, different cats respond to different products. Not to mention that one product is notably cheaper than the other. So, it all boils down to your budget and your cat’s response

Beyond that, you’ll have to try and judge based on the results. Either way, with these two options available, you’re guaranteed to put an end to your cat’s unwanted behavior!