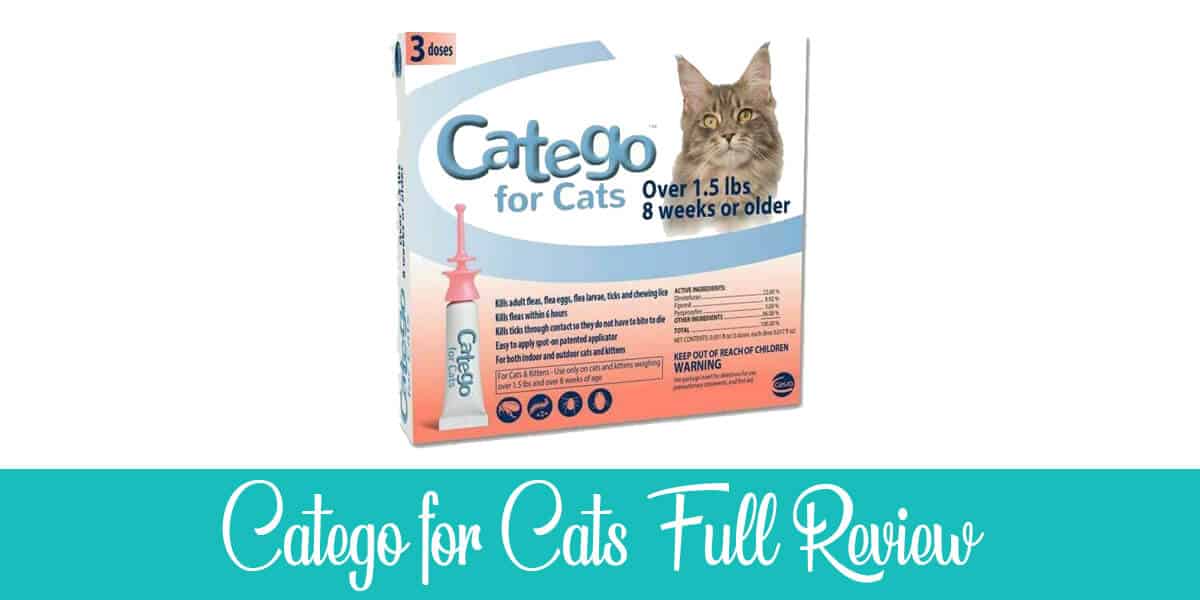 The fleas and lice chewing on your cat won’t like this! Why? Because you’re about to know of a product that has the capacity to rid your cat of its pests: Catego for cats!

In this review, you’ll learn more about:

Without any further ado, let’s dive into our Catego for cats review!

Catego for Cats Review: An Overview

The feline market has been long underserved, but it seems it won’t remain so anymore. With the introduction of product lines like Catego, that market is getting crowded.

Where Does Catego Come From?

Ceva Animal Health is one of the most famous brands concerned with your cat’s well-being. To that end, Ceva has released numerous product lines, such as Feliway.

Feliway is a cat-calming product. If your cat scratches, fights, or hides, Feliway will resolve that by emitting harmony-marker pheromones, the chemicals released by your cat when in a good mood.

Ceva then introduced another product line that also became a hit: Catego.

What Did Catego Bring to the Table?

With products like Advantage II and Frontline Plus killing fleas in a matter of 12 hours, a newcomer had to raise the bar.

With its ingenious formula, Catego can kill annoying fleas in only 6 hours, cutting the competitor’s time in half!

Catego’s Dosing: How Much and How Often?

Although Catego works within 6 hours, it achieves 97% of its efficacy within the first three hours of application. Ideally, you should apply it to your cat once per month, but that could vary a bit depending on your vet’s opinion.

Based on the mentioned dosing, a Catego pack can last anywhere from one to six months. That’s the case because Catego is available in 1-dose, 3-dose, and 6-dose packs.

Does My Cat Have to Be Flea-Bitten in Order to Use Catego?

No, you can apply Catego to provide a protective layer against future ticks and fleas.

That feature can come in handy if your cat has been around an unsanitary area as of late. That way, you can be one step ahead of jumpy, fast-spreading ticks.

Can Any Cat Use Catego?

For your cat to use Catego, she has to be 8 months or older. She also has to weigh more than 1.5 pounds.

Check out this comprehensive Catego vs Frontline comparison to know the key differences between both products and which one would be better for your feline friend. Also, here are some interesting comparisons to check out Petarmour vs Frontline plus for cats & Revolution vs Advantage Multi.

What’s Most Special About Catego?

Fleas can hop on your cat from various sources—indoors, outdoors, from fellow pets, and even from you.

To deal with that, Catego contains three main effective components: pyriproxyfen, dinotefuran, and fipronil. These three bad boys not only kill fleas but also eradicate flea eggs and larvae.

How Does Catego Neutralize Fleas, Lice, and Ticks?

Fleas, lice, and ticks are blood-sucking creatures. When they infest your cat, they lay eggs there and go through an entire lifecycle. So, in order for a product to be effective, it has to tackle that lifecycle in its different stages.

Catego doesn’t aim for merely killing the organism; it aims for breaking the whole lifecycle. That happens by:

Why Is It Crucial to Break the Cycle as Early as Possible?

Each flea, tick, and lice has got its own way that makes it poses health threats. With fleas, they reproduce really fast and jump really high—making them spread like wildfire.

Regarding ticks, they can carry diseases if they’ve previously fed on a wild animal. Diseases they can cause include:

As with lice, they’re particularly known for causing severe itching to your cat, and they can even cause hair loss.

Most of the side effects that could result from Catego are related to individual sensitivity. Some cats and kittens can be more sensitive than others. Usually, if a cat is sensitive to any pesticide product, she’ll be sensitive to all of them.

What Signs Might My Cat Show if She’s Sensitive to Catego?

You must keep an eye on your cat after Catego application. In case she shows the signs, what should you do?

Bathe her with soap and a generous amount of water. If the symptoms don’t subside, you have to visit the vet as soon as you can.

Will I Be Able to Touch My Cat Normally After Applying Catego?

Catego is a non-greasy solution—it dries fast, and it doesn’t leave a mess.

However, you need to avoid touching your cat for a while after applying Catego. In general, pesticides can cause mild eye irritation, skin problems, and might be fatal if inadvertently ingested.

These symptoms will be even more dangerous for your children. So keep them away from your cat on the heels of applying Catego.

Why Does My Cat Keep Getting Infested by Fleas?

You might accidentally carry the fleas into your home. Your cat can be infested if she touches stray cats or other animals like rats and raccoons.

Also, if she was around dark areas, that increases her chances of developing a fleas problem since this is the fleas’ favorite spots.

Fleas, ticks, and lice thrive on your cat’s blood. They can cause a lot of unease if not treated promptly. There are some pesticides out there to help, spearheaded by Catego for cats.

Catego kills these annoying pests within six hours only. It has many special features, like the fact that it breaks the fleas’ life cycle at multiple stages.

You need to be careful during and after the application of the product. Keeping Catego from coming into contact with you or your children is crucial. Also, stay vigilant for any unwanted reactions your cat might develop.