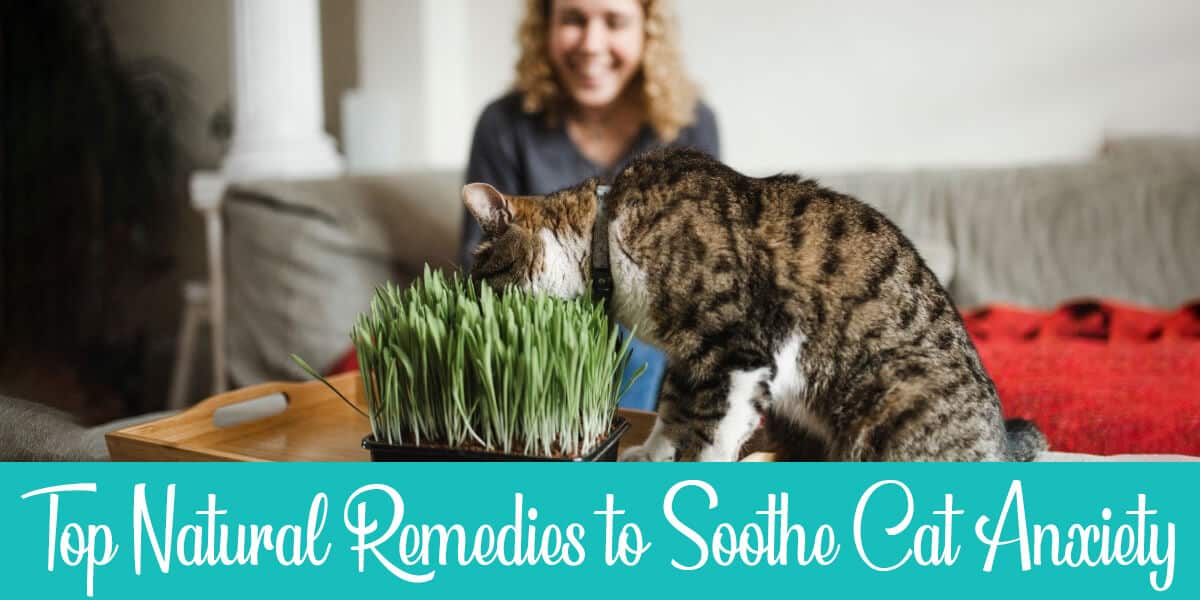 No pet owner wants to deal with an anxious cat. Stress can result in unusual behavior, and it usually ends with a puddle of pee outside the litterbox. Cats will go out of their way to grab their owner’s attention, which is justified, seeing as they can’t talk.

There are loads of remedies for cats’ anxiety. In this article, we’ll be reviewing five cat anxiety natural remedies you can use. Plus, we’ll offer you an alternative if you want to make your mission easier.

Take a look at these natural remedies; they’re highly effective in curbing anxiety symptoms for cats.

Catnip derives from the mint family Labiatae; it’s a perennial herb that’s believed to get cats exhausted, and thus relaxed. If you’re wondering about the name, people call the herb that because of the effect it has on cats.

But catnip is originally a stimulant; it’s known to get cats high upon consumption. So, what is it doing here? As a matter of fact, catnip is one of the best cats’ relaxants. It has a reputation for being a drug, although its relaxing effects are much more significant.

Once the high wears off, your cat will settle down as if she’s never been stressed. You can use the delayed reaction to your advantage if your cat gets anxious before specific events, such as going to the vet. Just let your cat consume it about 20 minutes before the visit. She’ll pass through the crazy phase and likely go for a nap to compensate for the lost energy.

You can give catnip to your cat in its dry form. If she tends to have an upset stomach when stressed, you can give her tiny amounts. Or, you can powderize it and add it to her food. It’ll also come in handy if you’re expecting visitors who get cats agitated, such as handymen.

It serves as a stimulant for cats, thereby resulting in ease of mind. It’s not only effective with cats, but humans also use it for curbing anxiety.

After ingesting, the cat will get ecstatic and start bouncing around. Any similar reaction is normal, as long as there isn’t any display of aggressiveness. If you notice your cat growling or extracting her ears to the back of her head, let her return to normal and don’t give her the roots again.

If you want your cat to swallow valerian roots without giving them directly to her, you can lay it out on the ground. She’ll likely get curious and start sniffing it. If you’re lucky, she’ll want to try the enticing herbs.

Alternatively, you can use valerian roots to induce a calming effect on your cat without letting her eat it. You can add it to an air diffuser or use it as a spray. It’ll spread an alluring aroma that’ll put your cat in a euphoria.

Chamomile is one of the most popular herbs for settling down anxiety. It doesn’t only work for humans, but it’s also an ideal relaxant for cats. It stimulates the cat’s nervous system in the same way medicinal drugs do. Therefore, it promotes a stress-free mind and controls anxiety symptoms.

When humans want to ingest chamomile, they drink the tea. Obviously, that won’t work for cats. So, the best way to give it to cats in its dried form. You can get dry chamomile flowers anywhere. Just add them to the cat’s food or make them into a powder and let her lick it.

We advise that you stay clear of chamomile essential oil. A lot of herbs develop toxic traits when they’re made into oils. Besides, the active compounds are more concentrated in oils, and the high dose may result in nausea or an upset stomach.

Chamomile tinctures aren’t the best option for cats’ anxiety either. They’re too concentrated, which can be too much for the liver to handle.

All things considered, it’s better to contact your vet before giving the cat chamomile. They’ll understand the cat’s medical condition better, and they’ll decide whether your pet will handle it.

Hops are mostly popular for being the main component in beer, but did you know they have relaxing effects on cats? That doesn’t mean that you’ll go home to find your cat sipping on a can of beer. When it’s for cats, hops are better consumed in their dry form. That way, they’re gentle on the liver and the kidneys.

Along with treating anxiety, hops also contain flavonoids that fight inflammation and bacteria. Additionally, they have antioxidant effects. Not to mention that the lower the blood pressure and stimulate heart rate, which are huge contributors to the relaxing effect.

Flower essences have been used to treat anxiety for ages. Technically, they’re not herbs, but they have the same effects on both humans and cats. They’re fast-acting, which is the main reason they’re globally recognized. If you’re in a hurry, and your cat isn’t helping, you can opt for them.

You can mix the tincture into the cat’s water or food. Alternatively, you can drop it directly into her mouth. If your cat doesn’t like the flavor, you can opt for TLC. Just massage it into her body and paws. The smell will relax her, and she’ll likely lick her paws.

Beware that bach flower remedies usually contain alcohol. Make sure to read the label and get the alcohol-free version for your feline. It’ll be made using vegetable glycerin instead, which means it’ll be safe for consumption.

An Alternative to Natural Remedies

Although natural remedies are supposedly efficient, some cats won’t respond to them if they have severe anxiety. In addition to that, the intoxication effect most of them leave on your cat is considered a major downside. A lot of pet owners won’t be able to deal with that. So, is there a reliable alternative?

Yes, you can always opt for Feliway products. As a matter of fact, they don’t stray far off natural remedies, seeing as they’re derived from the feline calming pheromone. Think of them as a synthetic version of the pheromone.

You can use them as a diffuser; you merely plug in the wall outlet and leave it to work wonders. Or, you can use their spray on the furniture, windows, and doors.

3 Reasons You May Want to Consider Feliway Products

If you like the idea of an alternative to natural remedies, we’ll show you further reasons you should consider using Feliway products for fighting cat anxiety.

Although natural remedies are easy to use, you can’t guarantee your cat will accept them. There’s a high chance your cat will hiss once she smells valerian roots. Even worse, it may show a nauseous response to some herbs.

With diffusers like Feliway, you’ll only be required to plug the diffuser into the electric socket and leave it on. It’ll produce an odor that’s only recognizable by animals, so you won’t be bothered by it. If you’re going for a spray, you’ll only spritz it on the surfaces that attract the cats. These include window sills, doors, and cabin bases.

Then, you’ll leave it for the cat to smell it. She’ll instantly relax, and her heart rate will slow down.

Your Cat Won’t Get High

Natural remedies are effective, but there’s always the big elephant in the room: they get cats high! While many pet owners may not have a problem with this, others will be concerned, and it’s justified. Some cats will get highly aggressive when they’re high.

When you give your cat herbs, it’ll only calm her until the effect wears out. On the other hand, when you use diffusers, the effect will last as long as they’re plugged in. So, the cat will be relaxed throughout the day. The same goes for sprays. If your spray wears out fast, you can always reapply it, but you can’t do that with herbs.

Cat anxiety is a nuisance to deal with, for both you and the cat. However, it’s one of the common health conditions that are easy to treat. There are hundreds of practices you can use to put your cat’s anxiety at bay. On top of that, a lot of natural remedies are available. They don’t cost much either.

And of course, there’s always the anxiety-fighting products like Feliway. No matter which option you’ll go for, we hope your cat gets a fast recovery!